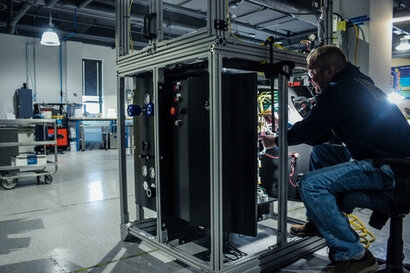 Advanced Ionics uses low-cost renewables to produce green hydrogen for less than the current cost of fossil fuel-derived hydrogen, by utilising significantly less electricity than other electrolysers. This new funding will enable the company to advance its product development roadmap and scale-up, and implement pilot projects with customers.

Heavy industry is one of the most carbon-intensive sectors, responsible for 20 percent of greenhouse gas emissions. To tackle this challenge, Advanced Ionics provides a highly sustainable, low-cost alternative amid the need to reduce reliance on natural gas for climate and geopolitical reasons in key markets such as Europe. The company’s Symbiotic Electrolyzer Technology has been designed to reduce costs by integrating with industrial facilities and pre-existing industrial processes.

“The green hydrogen market is set to grow at an extraordinary rate in the coming decades as the most viable approach for decarbonizing heavy industry” said Daniel Goldman, Co-founder and Managing Partner of Clean Energy Ventures. “But, to date, green hydrogen has not been competitive or reliable to enable widespread use. After more than five years of evaluating the sector, we backed Advanced Ionics because we believe this leadership team can scale a highly competitive technology to produce the lowest-cost green hydrogen at scale. Our investment in Advanced Ionics is founded on a shared end-goal to enable the most polluting industries to have a highly competitive and scalable decarbonisation solution.”

Advanced Ionics is based in the Midwest, a region with deep roots in manufacturing and industry. The current levelised cost of green hydrogen produced through electrolysis is around $4-5/kg, according to IHS Markit estimates; Advanced Ionics says its electrolysis can provide clean hydrogen without the green premium, for less than $1/kg using Symbiotic steam electrolysis in many industrial locations.

The company will be developing a series of demonstration projects during the next year with partners before expanding to deploy larger scale projects and a large-scale electrolyser manufacturing facility to serve key markets such as Europe and North America.