Friday, 13 January 2023
0
Robin Whitlock
Enapter has received another order for the delivery of an AEM Multicore megawatt-class electrolyser via its sales and integration partner Adsensys. 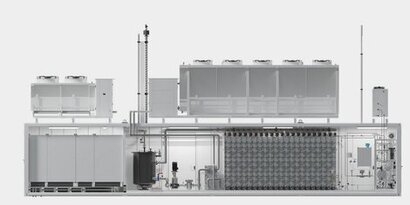 Enapter’s megawatt-class electrolyser is to be delivered by Adsensys to a Dutch energy company in the fourth quarter of 2023.

The energy company is a supplier of fuels to B2B customers and operates a significant number of retail stations. Its goal is to create a network of hydrogen filling stations, including production of its own green hydrogen. Adsensys, as a long-term project partner of Enapter, is handling the entire integration process of the AEM Multicore at a hydrogen filling station in the Netherlands. In the past Adsensys has already implemented a hydrogen CHP plant for a residential complex in Rozenburg, the Netherlands.

“Especially in the transport sector, the potential for the use of green hydrogen is huge” said Sebastian-Justus Schmidt, CEO of Enapter. “We are pleased to be able to contribute directly to the decarbonisation of road transport with our application-agnostic technology. Our Multicore technology in particular can efficiently and cost-effectively produce the desired quantities of green hydrogen on a large scale on site. This allows the energy from solar and wind power to be stored for later use.”