Wednesday, 16 February 2022
0
Robin Whitlock
The Suez Group has been conducting real world trials of the Citroën ë-Jumpy Hydrogen van – called the Citroën Despatch in the UK - at its Carcassonne site in France, which has its own green hydrogen production station. 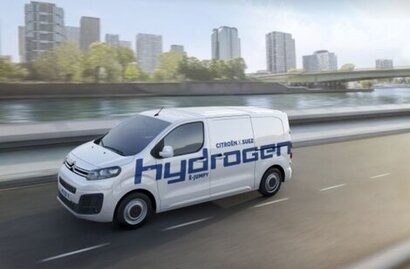 The feedback has been overwhelmingly positive, serving to highlight the benefits and capabilities of the new hydrogen powered vehicle. The operations team, have been particularly impressed by the panel van’s overall usability, extended range and practical payload.

The site foremen at the Carcassonne location use ë-Jumpy Hydrogen exclusively for their daily activities. Their role is multifaceted, involving worksite visits, the restocking of small and large equipment supplies and emergency repair work in the event of a water leak. They regularly undertake journeys of over 60 miles – a significant distance that can be achieved multiple times with ë-Jumpy Hydrogen’s 248 mile range.

Hydrogen technology allows for optimum practicality and wide-ranging usage requirements thanks to quick refuelling times that ensure vehicles are almost permanently operational. A complete refuel takes just 6 minutes from a 350 bar pump, while stations fitted with a 700 bar pump can refill in half that time. The 10.5kWh battery – providing a 31 mile backup power supply if the hydrogen tanks run out – is very easy to charge on a standard 230V socket.

The hydrogen technology combines a Lithium-ion battery with a fuel cell connected to hydrogen tanks. When hydrogen and air are brought into contact with a catalyst, the fuel cell generates electricity to power an electric motor. The only emission produced is water vapour. Compared to a battery, a fuel cell is considered more as an energy converter than a storage device.

This hybrid solution was chosen by Citroën following research conducted in partnership with Symbio, a joint venture specialising in fuel cells created by Michelin and Faurecia. Citroën ë-Jumpy Hydrogen benefits from both a 10.5kWh Lithium-ion battery and a 45kW fuel cell, powered by three 700 bar hydrogen tanks, developed by Faurecia, with a storage capacity of up to 4.4kg of hydrogen.

Hydrogen provides the energy needed for greater range, while the mid-capacity battery combines power and performance with energy recovery and recharging capability. As this solution positions the battery pack under the seats at the front and the hydrogen tanks under the floor in the rear of the van, the modifications have no impact on the load volume of the vehicle. This system also ensures there is no compromise in performance, with a fuel cell powerful enough to guarantee constant speed on the motorway. The battery then provides the energy required for acceleration and the extra power required when starting and for the first few miles on the road. Hybrid technology also means that the battery provides reserve power when the hydrogen tanks are empty, meaning drivers reduce the risks of ‘running dry’.

By 2055 in Europe, 450,000 Light Commercial Vehicles and 10,000 trucks are expected to run on hydrogen. To meet expected demand, the network of stations should expand to include 10,000 charging points. Industrial companies in the sector are likely to invest 430 billion euros over the next 10 years, with subsidies from Europe and member states accounting for around 25 percent of the total. The number of hydrogen fuel stations is set to increase from 133 in 2021 to 2,500 in 2030, including 1,000 in France and 1,000 in Germany. Over the same period, the price-per-kilo of hydrogen could be halved.

The challenge in terms of energy transition is to develop renewable green hydrogen production via the electrolysis of water using electricity from wind, solar power or biogas. Suez Group, in association with Siperrec, is developing a project that aims to create the first green hydrogen production and distribution plant (electricity produced from combustion of household waste transformed into hydrogen by a water electrolysis process) at an Energy Recovery Unit in Créteil in France. The plant is due to be operational by the end of 2022 and should eventually be able to produce up to 1 tonne of hydrogen per day, thereby preventing the emission of 1300 tonnes of CO2 each year.