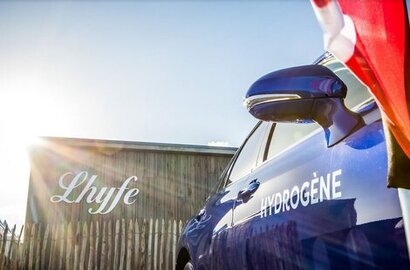 The company is developing more than 90 innovative projects across Europe. Some of the ground-breaking projects include a hydrogen rail demonstrator in Germany and a partnership with supermarket giant Lidl for a fleet of more than 100 hydrogen-powered forklift trucks, which could transform the retail and distribution sector.

In 2021, Lhyfe inaugurated the world’s first plant supplying a renewable green hydrogen produced using wind power to customers in western France. The UK entry is its latest step in its drive toward carbon reduction.

The company has ambitions for more than 3 GW of electrolytic hydrogen in operation by 2030. It produces its renewable green hydrogen by using water and wind or sun to power its electrolysers.

Water is fed into the electrolyser, which is split into hydrogen and oxygen meaning the only by-product is oxygen. The hydrogen is then compressed and transported locally from the production unit to various consumers across the region, providing an alternative to fossil fuels and building a local eco-system.

Production units are currently being deployed onshore, but Lhyfe has an aim to take electrolysis offshore – making use of the huge offshore wind potential the UK has on offer, particularly in the North Sea. Lhyfe is currently preparing to launch the world’s first offshore renewable hydrogen production demonstrator, off the coast of Saint-Nazaire in France.

“Renewable green hydrogen production at scale is one of the key solutions to help the UK reach its net zero targets” said Colin Brown, UK country manager of Lhyfe. “It’s an enabler that offers a solution to all sectors and parts of society, and the good news is it’s available to be deployed today. We are exploring exciting opportunities across the UK to enable local decarbonisation. Lhyfe has a strong ethos of working with partners to deliver projects that create real local value, and this is a key focus for the newly formed UK business. The UK can become a global leader in the production of green hydrogen, moving away from our reliance on fossil fuels, improving energy security, contributing to net zero and helping drive the economy. Our mission is to deploy green hydrogen production at scale and grow our operations in line with demand. We encourage any UK industry or organisation seeking to decarbonise to get in touch with us.”

Matthieu Guesné, CEO and founder of Lhyfe, added that the opening of the UK subsidiary is in line with the company’s international deployment plans and that the speed with which the deployment is taking place – the sixth European subsidiary for the company in two years – confirms the growing enthusiasm of European countries for renewable hydrogen and Lhyfe’s amplified interest.

“Through this subsidiary, we will be able to offer decarbonisation solutions that meet the specific uses and constraints of the British market” said Mr Guesné.