Thursday, 29 September 2022
0
Robin Whitlock
Ineos has awarded a key contract for the design of its world-scale low-carbon hydrogen plant at Grangemouth, which is expected to be operational by 2030, to Atkins. 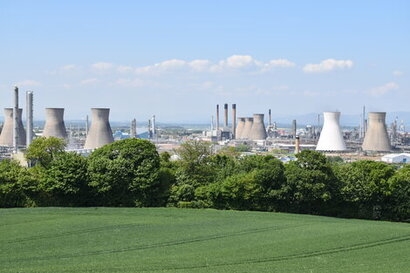 The hydrogen plant will further reduce emissions from the site by 1 million tonnes per year as the site targets net zero by 2045. In developing a hydrogen hub at Grangemouth, Ineos says it will also be supporting other end users of this low-carbon fuel source to reduce their carbon footprints too.

“The construction of our hydrogen plant is a vital component to delivering our net zero road map at Grangemouth and an enabler for others to reduce their footprints too” said Colin Pritchard, Sustainability Director at Ineos Grangemouth. “Alongside our support and active involvement in the Scottish Cluster (Carbon Capture and Storage) and the Forth Green Freeport, Ineos is at the forefront of actions and investments to reduce carbon emissions in Central Scotland.”

Ineos acquired the Grangemouth site in 2005 and the hydrogen plant will follow other significant investments there. Fundamental to Ineos’ Hydrogen project will be access to the Scottish Cluster carbon capture and storage (CCS) infrastructure. The CO2 from the hydrogen plant will be sent directly offshore to be permanently and safely stored in rock formations deep below the North Sea.

In addition to the Scottish Cluster, the company is actively involved in the Forth Green Freeport bid, which if successful, will further support the early development of its hydrogen production facility and its ambitions to achieve greater than 60 percent carbon reduction by 2030 on the road to the company’s net zero commitment by 2045.

“Scotland has the resources, the people and the ambition to become a world leader in hydrogen production – for both domestic use and for export to Europe” added Net Zero & Energy Secretary Michael Matheson. “It will play an increasingly important role in supporting our just transition to a net zero economy and deliver good, green jobs for our highly skilled workforces. Low-carbon hydrogen meanwhile offers a route for our critical industrial sector to decarbonise, and I welcome this latest step in Ineos’ road map to cut emissions, and their continued investment into the sustainability of our largest manufacturing site. The plan clearly demonstrates how important carbon capture technology will be to the sector’s energy transformation over the coming decades and the Scottish Government will continue to press the UK Government to accelerate the Scottish Cluster’s place in its cluster sequencing process, while standing ready with our own support to help deliver this vital technology.”