Wednesday, 26 October 2022
0
Robin Whitlock
The Netherlands is organising a green H2 Trade Mission from November 7th to 11th 2022 to Chile in which leading companies from the Dutch energy sector will come and explore opportunities to develop and grow the Chilean Green Hydrogen economy. 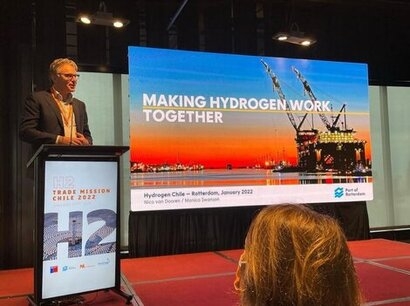 Courtesy of The Netherlands Government.

The main focus will be on hydrogen infrastructure needed to secure the green hydrogen supply chain (production, storage, transportation, distribution), formulating conditions for establishing an import-export corridor between Chile and Europe, the social and economic impact, as well as investigate opportunities for concrete applications for the local energy transition. This also includes territorial aspects. Interest for this H2 mission is high, as the Chilean strategy is to become one of the largest and possibly most competitive renewable energy producers worldwide by 2030.

Representatives from Dutch companies including Port of Rotterdam, Port of Amsterdam, but also consultants, storage and transportation providers will visit Chile for one week to meet key actors of this flourishing Chilean Green Hydrogen ecosystem. Visits are planned to the main hydrogen hubs in the country and, encounters with companies and local authorities to discuss opportunities and challenges for green hydrogen production, export, and local energy transition.

The Green H2 Trade Mission to Chile, organized by the Netherlands Enterprise Agency (RVO) in close cooperation with the Chilean Ministry of Energy and ProChile (responsible for promoting Chile abroad), is a valuable opportunity to build synergies and design solutions focused for the green hydrogen supply chain between Chile and Europe. Topics like certification, regulations, environmental impact, trade, technologies, human capital and infrastructure development are on the agenda.

“As government, we are committed to ensure that Chile takes advantage of the opportunity provided by our abundant natural resources, such as the sun in the Atacama Desert and the wind in Patagonia” said Diego Pardow, Chilean Minister of Energy. “To this end, we are taking on the challenge of developing a sustainable green hydrogen industry, considering not only its production, but also the generation of new knowledge that will be reflected in innovations that add value to our economy, support the fight against climate change and benefit citizens throughout the country. The agreement that we signed with the port of Rotterdam and is currently in the implementation phase, will allow us to move forward on this path of sustainable and just energy transition.”

Marcelo Villagrán, ProChile Director in The Netherlands and in charge of Hydrogen for Europe, added that given the abundance of renewable energy in Chile, green hydrogen generated from renewables will change the Chilean economy.

“But this new industry needs local community engagement and has to take care about safety and preservation of biodiversity” said Mr Villagrán. “Fair distribution of benefits to the local community is essential for a successful hydrogen industry and to achieve this goal it is vital that we work hand in hand with European actors.”

Carmen Gonsalves, ambassador of the Kingdom of the Netherlands in Chile, said that The Netherlands, with its focus on innovation, wants to be a frontrunner in the energy transition and play a key role in Europe’s hydrogen strategy and that this is shown clearly in the well-developed hydrogen ecosystem.

“Europe will need around 20 million tons of green hydrogen by 2030” said Ms Gonsalves. “The Netherlands has the ports for the import of hydrogen, and one of the most sophisticated energy infrastructures to distribute hydrogen to other countries in Europe. Without a doubt we are in an excellent position to develop the hydrogen economy. Our world class companies, the resilience, versatility and diversification of our economy allow us to address any challenge this new economy may bring. Europe urgently needs to decarbonise in order to reduce the effect of climate change. Chile is a country with huge potential in the production of green hydrogen and derivatives such as green ammonia, methanol and synthetic fuels, capable of accelerating its own energy transition and providing a substantial part of the energy needed in Europe.”

The Netherlands and Chile have been working together to create a hydrogen corridor generated from renewable energy in Chile and distribute it efficiently throughout Europe from the Dutch ports. With this Green H2 Trade Mission to Chile, further cooperation is sealed between the two countries to work together towards a larger common goal.