Friday, 18 March 2022
0
Robin Whitlock
Lhyfe, a company specialising in green renewable hydrogen production, has won a 2022 Hydrogen Trophy at the Hydrogénies competition, an event that rewards the most dynamic and innovative players in the hydrogen sector in France. 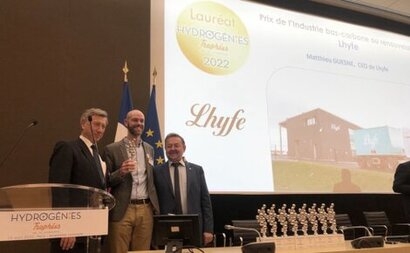 The prize was awarded to Lhyfe during a ceremony organised at the French National Assembly, in the presence of the elected representatives of the hydrogen study group chaired by French member of parliament Michel Delpon, of ADEME and Philippe Boucly, president of France Hydrogène.

The award comes six months after the inauguration of the company’s first renewable hydrogen production plant. Lhyfe won first prize for businesses in the hydrogen sector in the Low-Carbon or Renewable Industry category. The Nantes-based company has developed the world’s first industrial site to produce renewable hydrogen using power from wind turbines and is currently working on 91 projects in France and Europe – onshore and offshore – doubling its staff every six months.

The Hydrogénies Hydrogen Trophies is a major event for the hydrogen sector in France and since 2019 has rewarded an innovative project, business, organisation or community that has carried out a remarkable project or developed an innovative solution in the field of hydrogen.

“We are very proud to see our commitment and expertise rewarded by the hydrogen community” said Matthieu Guesné, CEO and founder of Lhyfe. “This distinction comes in a context that requires a rapid energy response that can deliver on economic and environmental challenges. We are convinced that ecological hydrogen – which we now produce on an industrial scale and at a competitive price – is part of this response, and we are already standing with communities and industry to meet these challenges together.”