Tuesday, 16 August 2022
0
Robin Whitlock
The North West Hydrogen Alliance (NWHA) is urging Government to accelerate its plan for hydrogen storage business models, with a new report making it clear that greater focus is needed on the distribution and storage infrastructure needed to deliver hydrogen at scale. 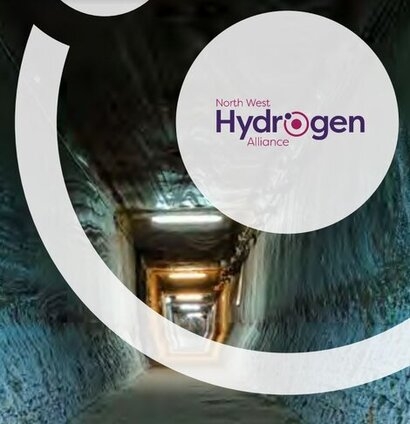 The report finds that support mechanisms to support hydrogen production are progressing well towards implementation, but the NWHA believes that the government’s intention to design new business models for storage infrastructure by 2025 is not ambitious enough. The industry group is calling for this target to be brought forward to at least 2023.

The call follows the publication of the Hydrogen Sector Development Action Plan last month. The NWHA believes that the 2025 target risks deterring timely investment in clean energy storage, which is vital for the UK to take control of its clean energy security

The report outlines why large scale storage is essential for hydrogen to deliver its vital role in decarbonising the UK.

To balance our clean energy system, storing hydrogen when renewable electricity generation is high and releasing it when it’s low

To minimise system costs by maximising the utilisation of carbon capture usage and storage (CCUS) enabled hydrogen production facilities, enabling them to operate at a consistent high load factor all year round

To balance the energy supply to meet the variable demands of commercial, power generation and domestic heating on a daily and seasonal basis

To enable hydrogen blending into the gas distribution network

“Storage is vital to unlocking the full potential of hydrogen and is essential for UK energy security” said Professor Joe Howe, Chair of the NWHA and Executive Director, Thornton Research Institute at the University of Chester. “It will play an important role in balancing hydrogen production from intermittent renewables and helping to manage the UK’s daily and seasonable fluctuating heating demands. While progress is being made on developing much needed business models for hydrogen production, Government needs to also press ahead with policy around hydrogen storage. We’re calling for the 2025 deadline for hydrogen storage business models to be brought forward to 2023, to unlock investment and ensure these storage projects, which inevitably have a long lead in time, are ready for when production ramps up. The North West Hydrogen Alliance stands ready to work with Government to achieve this.”

The report estimates that around 4TWh of underground storage will be required to balance the seasonal variation in hydrogen demand per 1 million homes in the UK. Hydrogen can be stored underground either in salt caverns or depleted oil and gas reservoirs. In the North West of England plans are being developed by INEOS to store hydrogen in Cheshire salt caverns as part of the HyNet North West project. The report also calls for the hydrogen transport network and hydrogen storage infrastructure to be developed in tandem to ensure that stored hydrogen can reach its end users.

The Energy Security Bill, which was introduced to parliament earlier this month, identified a vital role for hydrogen in decarbonising the UK, with the hydrogen production target doubled from 5GW to 10GW by 2030.

The North West is already making significant strides in developing a hydrogen economy. The region is home to the leading hydrogen and carbon capture project HyNet North West, which will deliver amongst the lowest cost CO2 transport and storage infrastructure in the UK by extensively repurposing existing onshore and offshore assets. The project can deliver nearly 40 percent of the Government’s new national 2030 target for low carbon hydrogen production. Able to benefit from the existing regional technical skill base in engineering, chemicals production, refining and offshore oil and gas, HyNet North West is planning to be operational from 2025.