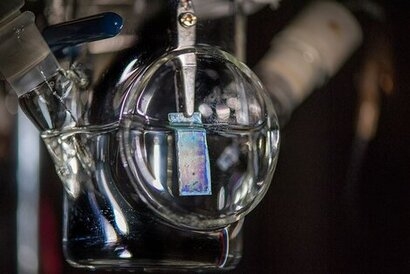 Photoelectrochemical (PEC) water-splitting, which relies on sunlight to split water into its component elements - oxygen and hydrogen - stands out as potentially one of the most sustainable routes to clean energy. Measurements of how efficient the PEC process is on an identical system can vary wildly from different laboratories, however, from a lack of standardised methods. The newly developed best-practices guide published in Frontiers in Energy Research is intended to provide confidence in comparing results obtained at different sites and by different groups.

The publication provides a road map for the PEC community as researchers continue to refine the technology. These best practices were verified by both laboratories via round-robin testing using the same testing hardware, PEC photoelectrodes, and measurement procedures. Research into photovoltaics has allowed a certification of cell efficiencies, but PEC water-splitting efficiency measurements do not yet have a widely accepted protocol.

“It’s really difficult to compare reported PEC water-splitting efficiency results between labs, because people tend to make measurements under different conditions” said Todd Deutsch, a senior scientist at NREL and co-author of the new journal article, “Best practices in PEC: How to reliably measure solar-to-hydrogen efficiency of photocathodes.” “The Department of Energy recognized this a while ago, so there have been quite a few efforts to establish standards that we’ve been involved in - multi-lab collaborative efforts and also NREL-specific efforts.”

Other authors from NREL are Keenan Wyatt, Myles Steiner, and James Young.

“The motivation for this protocol paper was both to serve as a guide for researchers just entering the field as well as describing subtle technique tips for more experienced scientists” added Francesca Toma, a materials staff scientist at Berkeley Lab and a co-author of the journal article. “We leveraged the unique strengths of two national labs that together span the basic to applied science realms.”

The article spells out the path so that all laboratories can follow a uniformity of experimental practices, beginning with the materials needed for the fabrication of photoelectrodes. The authors go on to detail the fabrication procedure, the experimental setup, and the process to measure the solar-to-hydrogen (STH) efficiency. Direct measurement of the amount of hydrogen generated by PEC water-splitting is required for an accurate characterisation of STH efficiency, the researchers noted.

PEC water-splitting was first noted in scientific publications in 1972. Research since then has continued to refine and improve the process, but so far, no standardized STH measurement procedures have been established. NREL set the first record for STH efficiency exceeding 10 percent (12.4 percent STH) in 1998, but in 2016 revised that figure downward in a publication that described common pitfalls to avoid in making efficiency measurements, after realising the original experiment had been over-illuminated. In 2017, the team used bandgap engineering to design light absorbers more optimized to utilise the solar spectrum, which resulted in a higher STH of 16.2 percent, a new world record at the time.

The US Department of Energy’s Hydrogen and Fuel Cell Technologies Office has set 25 percent as the ultimate target for STH through PEC water-splitting, although preliminary cost analysis suggests that competitively costed hydrogen could be achieved with lower efficiencies. Photoelectrodes have demonstrated efficiencies from 10 percent to 20 percent.

PEC researchers also continue to work on improvements to durability. The semiconductor used to capture sunlight is immersed in an aqueous (water-based) electrolyte. But with electrolyte pH ranging from acidic to alkaline, the electrolyte corrodes the semiconductor and shortens its lifespan.

“Durability still is pretty much a showstopper for this technology” Mr Deutsch said. “There’s been some progress, but not nearly as much as there has been recently in improving efficiency.”

Deutsch co-authored a new paper, also in Frontiers in Energy Research, on “Long-Term Stability Metrics of Photoelectrochemical Water Splitting” that describes achieving the simultaneous highly efficient and stable unassisted PEC water-splitting as the “Holy Grail” in clean and renewable fuel generation. That paper provides a framework for conducting long-term stability experiments with the hopes of achieving ultrahigh stability (lasting more than 10,000 hours) and efficiency greater than 15 percent.

HydroGEN Advanced Water Splitting Materials Consortium, established as part of the Energy Materials Network under the US Department of Energy Office of Energy Efficiency and Renewable Energy's Hydrogen and Fuel Cell Technologies Office, funded the research.

NREL is the US Department of Energy's primary national laboratory for renewable energy and energy efficiency research and development. NREL is operated for the Energy Department by the Alliance for Sustainable Energy, LLC.