Thursday, 09 June 2022
0
Robin Whitlock
Plug Power, a provider of turnkey hydrogen solutions for the global green hydrogen economy, has announced it will build a 35-tons-per-day green hydrogen generation plant at the Port of Antwerp-Bruges. 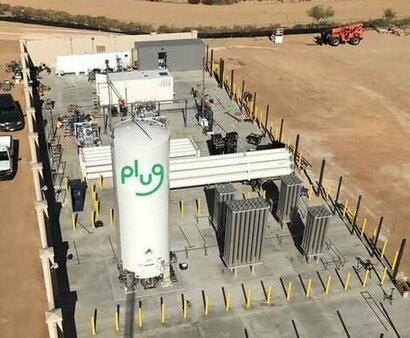 Plug signed a 30-year concession agreement to build the plant at the Belgian port, the second largest in Europe. The company intends to erect a 100 MW green hydrogen plant, using its own electrolyser and liquefaction technology, on 28 acres of land leased under the agreement. Plug will subsequently produce up to 12,500 tons per year of liquid and gaseous green hydrogen for the European market.

“As Europe grapples with the challenges of climate change and energy security, our agreement with Port of Antwerp-Bruges will deliver much-needed natively generated, green hydrogen to local markets” said Andy Marsh, CEO of Plug. “The energy crisis in Europe resulting from geopolitical risks has accelerated the demand for green hydrogen development projects.”

Minister-President of Flanders Jan Jambon added that hydrogen plays an important role in the energy transition and at the same time offers many economic and societal opportunities for Flanders.

“Due to the strategic location of our ports and the expertise of our companies, research centres and educational institutions, we have all the assets to become the hydrogen hub of Western Europe” said Mr Jambon. “An opportunity that we must not miss. Plug's choice for Antwerp is the result of the strong relationship that I, the Flemish Government, Flanders Investment & Trade, and the Port have built with the company. At the same time, it confirms the role that Flanders plays in renewable energy. I am therefore very pleased to welcome Plug in Flanders.”

Belgium’s Minister of Energy Tinne Van der Straeten said that Belgium is determined to play a pioneering role in the breakthrough of large-scale green hydrogen, which is an objective that is well reflected in the Belgian federal hydrogen vision and strategy ‘Green hydrogen for a clean industry.’ That strategy is built on four pillars: positioning Belgium as an import and transit hub in Europe, becoming a leader in hydrogen, establishing a robust hydrogen market and investing in cooperation as a key success factor.

“Companies like Plug, who integrate their activities into our federal strategy, are the best example that we are moving in the right direction” said Mr Van der Straeten. “This way, we can achieve our climate goals to reduce greenhouse gasses by 55 percent in 2030 and become the first climate neutral continent by 2050. This will be a strategy that pays off for Belgium, for employment and for the climate.”

Port of Antwerp-Bruges sits in a strategic location in Europe. At the centre of the largest chemical industry cluster in Europe and close to the North Sea, it provides transportation connections to Germany, Belgium, Netherlands, UK, and France. The port area is also one of the busiest logistics areas in Europe, handling annually 289 million tons of maritime freight, 24 million tons of rail freight, and 108.5 million tons of barge freight. Sixty percent of Europe’s purchasing power is located within 300 miles. This means it is set to become a major hydrogen hub for Europe and has plans to be a lighthouse port for climate-neutral infrastructure. Through its new green hydrogen plant, Plug is committed to playing a pivotal role in helping Port of Antwerp-Bruges achieve this ambition.

The site location provides the opportunity for a ready supply of electricity from on-site and site-adjacent wind turbines generating dozens of megawatts, with an electric interconnection point less than a mile away. In addition, the site offers water, road, rail, and pipeline access for the delivery of green hydrogen to customers. An open-access hydrogen pipeline will be built along the site, and Plug has signed a contract with Fluxys to engage in a feasibility study for enabling a connection to the pipeline, which will be part of a European open-access hydrogen backbone.

Plug will build in the port’s NextGen District, an area dedicated to companies supporting the circular economy. Leveraging the cluster being assembled in the NextGen district, Plug is exploring partnerships to complete the circular use of wastewater expelled during the production of green hydrogen.

The hydrogen produced at the site will serve multiple clients at the port. More than 1,500 acres of covered warehousing at Port of Antwerp-Bruges supports heavy manufacturing industries. Plug will contribute to decarbonising the logistics flows of the port, with material handling solutions, fuel cell vans through HYVIA – a joint venture between Plug and Renault, and stationary power solutions for shore power.

North Sea countries are major producers of wind power with over 15 gigawatts (GW) of installed capacity. They have committed to grow capacity to 65 GW by 2030 and 150 GW by 2050, as part of a recent cooperation agreement signed by Belgium, Germany, Denmark, and the Netherlands. The European Union recently launched a $315 billion REPowerEU initiative to support the shift from Russian fossil fuels to renewable energy including green hydrogen.

The announcement of this project illustrates the strength of trans-Atlantic cooperation between a leading international technology company and a forward-thinking European port operator. Plug is building out an end-to-end green hydrogen ecosystem across the world, focused on hub locations with attractive economics and strong customer demand. Europe is core to Plug’s strategy, reflected in multiple recent investments, such as the opening of a service and logistics centre in Duisburg, Germany, the acquisition of Netherlands-based Frames Group, and the inauguration of a hydrogen-powered light commercial vehicle production plant with Renault in Flins, France.