Monday, 24 October 2022
0
Robin Whitlock
A new project developed by Teesside University alongside a leading industry partner is set to make a major impact in the implementation of hydrogen as a net-zero fuel. 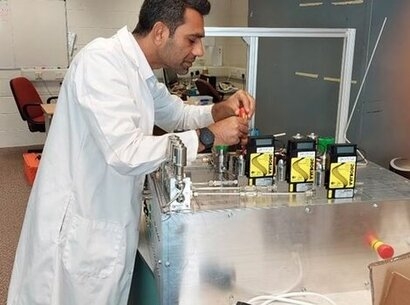 Scientists at the university are working with leading hydrogen consultancy EnAcumen to develop a first-of-its-kind hydrogen purification process. The project is developing a unique technology which aims to overcome the difficulties in extracting hydrogen from ammonia.

Ammonia, a compound of nitrogen and hydrogen, has long been acknowledged as integral to the successful implementation of hydrogen as a commonly used fuel. Its zero-carbon and high hydrogen content is recognised as an effective hydrogen carrier; enabling hydrogen to be safely and efficiently stored and transported to the point of use.

The well-established facilities for ammonia production and infrastructures worldwide for storage and transmission provide ammonia with indispensable advantages, underpinning its role in enabling a clean energy future. At the intended ‘point of use’, ammonia can be decomposed into hydrogen and nitrogen with minimal energy and free of carbon emissions. However, the current decomposition technology leaves residual ammonia and nitrogen by-products which are considered as impurities and can poison the intricate components of hydrogen fuel cells, debilitating their performance and rendering them ineffective at converting the chemical energy of hydrogen to electricity.

As a result, scientists around the world are striving to develop a conjoint ammonia and nitrogen removal process that provides clean and pure hydrogen for any fuel cell. The stringent process requirements are nearly impossible to achieve via standalone cleaning methods.

The Teesside University and EnAcumen team have embarked on a difficult pathway to develop and test a novel tandem separation process for ammonia and nitrogen. The project, named ‘Joseph’ after the renowned 18th century British chemists Joseph Black and Joseph Priestley who worked to sperate ammonia gas, combines membrane and sorption mechanisms for effectively separating ammonia and nitrogen, resulting in pure hydrogen for the use in fuel cells.

The project forms part of the Tees Valley Hydrogen Innovation Project (TVHIP), a Teesside University-led initiative which is supporting the growth of the region’s hydrogen economy.

“This is an exciting time for the hydrogen economy” said Joseph’s technical lead Dr Faizan Ahmad. “Effectively removing ammonia and nitrogen after its decomposition has remained the biggest bottleneck. We are positive that have such a growing choice of potential separation technologies like Joseph will inspire further development in hydrogen fuelled energy generation and transport options.”

Dr Humbul Suleman, who is investigating different sorption options for the technology, added that the research under the TVHIP will provide sister solutions in the field of carbon capture, pollution abatement, and greenhouse gas removal.

EnAcumen has entered a strategic partnership with TVHIP to collaborate on research, co-innovation, talent development and to encourage the exchange of ideas for developing off-the-shelf solutions for hydrogen purification.