Wednesday, 22 December 2021
0
Jane Marsh
Living in the midst of a new space race is exciting, but this push to take humanity to the stars is working in direct opposition to the global quest to lower carbon emissions and make the planet more sustainable. The space tourism industry is expected to reach $2.58 billion between 2021 and 2031. Right now, a single rocket launch can generate upwards of 300 tons of CO2, injecting it directly into the upper atmosphere. 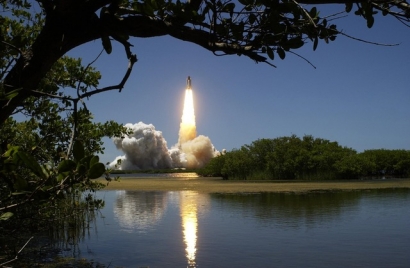 Image by NASA-Imagery from Pixabay

Space tourism and flight will continue growing exponentially over the next decade. How can biofuels make this push toward interstellar travel more sustainable?

The world was lucky to see a handful of rocket launches every year during the 1990s and 2000s. These were mostly satellites bringing supplies or astronauts to the International Space Station. SpaceX conducted 26 launches in 2020, and that number is expected to climb. That also doesn’t count the Starship test flights or the fact that SpaceX hopes to launch 15 million rocket flights a year.

That could rival the state of the commercial airline industry with its 16.9 million flights in 2020. This sector plans to send a billion passengers on flights powered by alternative fuel options by 2025, but it might face some stiff competition.

The more flights there are, the more CO2 these launches will be putting into the atmosphere. This will cause problems as long as they rely on traditional fuels like kerosene and hydrogen.  It’s easy to overlook the environmental impacts of space exploration when everyone is so excited about the potential for sending humans to Mars or the moon. Still, each launch releases a bit more CO2 into the atmosphere and makes it harder to avert a climate disaster.

Hydrazine is a popular choice for rocket fuels because it burns so well in the presence of oxygen or — as is the case with rocket launches — with oxidizers. Unfortunately, it’s also highly volatile, prone to spontaneous explosions and incredibly toxic to humans. Working with hydrazine requires a series of very strict safety precautions. A green biofuel could be the answer, making it easier to fuel spacecraft during the manufacturing stage rather than waiting until they reach the launch facility.

In 2019, NASA launched the Green Propellant Infusion Mission (GPIM) to showcase a green alternative fuel for spacecraft. AF-M315E spent 13 months in a low earth orbit utilizing a hydroxyl ammonium nitrate fuel mixed with an oxidizer. In addition to lacking the toxicity that hydrazine boasts, GPIM’s fuel is denser than its volatile cousin and can deliver more thrust per quantity of rocket fuel. It also doesn’t need a heater to keep it from freezing in the brutal cold of outer space.

Crafting biofuel can be challenging, especially for something that needs to withstand the rigors of space flight. Traditional biofuel production methods — fermentation and heating — have their drawbacks when used alone. Fermentation creates a biofuel that only captures about 35% of the substance’s stored potential energy because the bacteria and enzymes used in this process can’t convert lignin into alcohol.

Heating the materials in a low or oxygen-free environment breaks down the materials into bio-oil that can be refined into other biofuel products. Still, careful temperature and pressure regulation are essential during this step. Too much heat and the liquid biofuel will solidify into its carbon coke stage, becoming essentially useless for creating biofuel.

Combining the two production methods — a process known as catalytic hydropyrolysis — could create the kind of yields required to make enough biofuel to power the planet and carry the human race to the stars.

A Falcon 9 launch uses rocket-grade kerosene as its primary fuel, supplemented with supercooled liquid O2 as an oxidizing agent when it leaves the atmosphere. This dumps huge amounts of CO2 directly into the upper atmosphere. Even hydrogen-powered rockets can impact the planet during their launches by leaving water particles in the upper atmosphere where they can condense into clouds.

Orbex Prime is opting for a low-carbon fuel, as well as a unique launch mechanism that could change the way the space industry gets into orbit. The Orbex Prime launch vehicle will launch horizontally from an aircraft carrier, which generates fewer emissions than a vertical takeoff. That, paired with the low-carbon fuel, could potentially reduce each launch’s CO2 emissions by 96%. Instead of generating 300 tons of carbon dioxide, the Orbex Prime launches will only generate 13.8.

Looking for green fuel alternatives for space flight isn’t just about finding a better way to reach the stars. It’s essential for protecting the environment to ensure there is a planet left to launch from in a couple of hundred years.