What SpaceX Teaches Us About Renewable Energy Adoption

Monday, 26 July 2021
0
Jane Marsh
On July 20, Jeff Bezos entered space on his rocket, the Blue Origin. The world watched in awe as he boarded with his brother and returned safely to the surface. Bezos, and others, plan on expanding space missions, eventually establishing civilization on Mars. 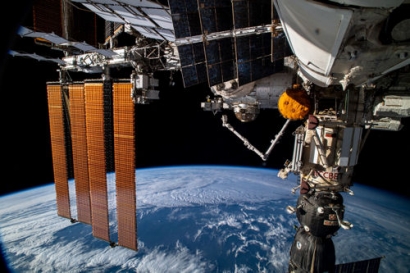 The International Space Station is pictured 273 miles above the south Atlantic Ocean. (NASA)

Developing a Mars colony is an ambitious pursuit. It will ultimately reduce human interference on Earth, limiting greenhouse gas emissions and surface pollution. A significant portion of our carbon emissions derive from fossil fuel combustion during the generation of electricity.

Unlike Earth, Mars fails to produce the raw elements used in conventional energy production processes. Because fracking and mining are off the table, we must access alternate forms of energy. The sources must align with Mars’s accessible elements, helping preserve resources rather than deplete them.

Outside of transportation from Mars, we must evaluate the sustainability of rockets leaving Earth. Currently, the SpaceX Falcon 9, a reusable rocket, uses kerosene and liquid oxygen for fuel. Kerosene generates adverse environmental and human health effects.

During combustion, kerosene releases black carbon, generating as much heat as 700 kilograms of carbon dioxide emissions. Atmospheric pollution drives the rising global temperature and its negative ecological impacts. We must also evaluate the production emissions from rocket manufacturing, gaining the life cycle footprint.

They use a portion of renewable energy in material production. When evaluating the sustainability of SpaceX, we must additionally assess water use. During takeoff, rockets can reach temperatures of 5,800 Fahrenheit on average.

Launchpads utilize vast quantities of water, cooling down the system and preventing the overheating of essential components. Pumping the water to the pad also uses high counts of fossil fuel-driven electricity, expanding the project's carbon footprint.

All solar arrays can generate 120 kilowatts of clean energy from the sun. The system displays promising potential for a zero-emission electricity source on the Mars colony.

A significant sustainability challenge in space missions is the pollution left outside of Earth. Each time we launch a rocket, paint chips, tools, plastic and more escape the ship, generating dangerous litter. A small piece of garbage accidentally orbited into the ISS, cracking its window.

Larger pieces or trash pose severe threats to astronaut safety. Musk's development of reusable rocket parts decreases the generation of pollution in outer space. He also made an effort to collect pollution on Earth's surface generated from launches.

If Musk has shown us anything over the years, it is that technological advancements take time. He developed Space X in 2002, taking decades to generate more sustainable missions than NASA. We can continue developing green technology, helping all space missions lower their environmental impact.

Musk developed SpaceX as a means of preventing climate change advancements. We can improve the conservation of Earth's natural state from the surface by decreasing our greenhouse gas emissions. Adopting an eco-conscious mindset can increase an individual's awareness of their action's ecological effects.