Ancient Technology Could be Utilized for Modern Energy Storage 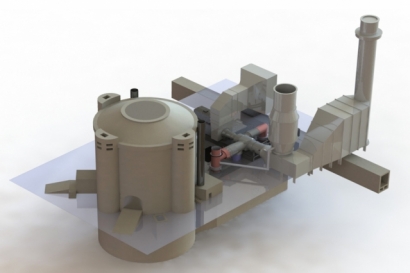 According to MIT, the idea of FIRES is to make use of excess electricity produced when demand for power is low by using electric resistance heaters. These convert electricity into heat. The devices would use the excess electricity to heat a large mass of firebricks enclosed in an insulated casing. At a later time, the heat could be used directly for industrial processes, or it could feed generators that convert it back to electricity.

Technologically, the system “could have been developed in the 1920s, but there was no market for it then,” says Charles Forsberg, a research scientist in MIT’s Department of Nuclear Science and Engineering and lead author of a research paper describing the plan, that appears this week in the Electricity Journal.

Currently the options for storing excess electricity are limited to batteries or pumped hydroelectric systems. By contrast, the low-tech firebrick thermal storage system would cost anywhere from one-tenth to one-fortieth as much as either of those options, Forsberg says.

Firebrick itself is just a variant of ordinary bricks made from clays capable of withstanding much higher temperatures, ranging up to 1,600 degrees Celsius or more. Such high-temperature bricks have been found in archeological sites dating back to around 3,500 years ago. The fact that these bricks have survived until now is proof of their durability.

There are obstacles that need to be overcome, however. The current limit on FIRES is the resistance heaters. Existing low-cost, reliable heaters only go to about 850 C. Ultimately, Forsberg suggests, the bricks themselves could be made electrically conductive, so that they could act as low-cost resistance heaters on their own, both producing and storing the heat.

Turning that heat back into electricity is a bigger technical challenge, so that would likely be a next-generation version of the FIRES system, Forsberg said. That’s because producing electricity with the conventional turbines used for natural gas power plants requires a much higher temperature. While industrial process heat is viable at about 800 C, he says, the turbines need compressed air heated to at least 1,600 C. Ordinary resistance heaters can’t go that high, and such systems will also need an enclosing pressure vessel to handle the needed air pressure. But the advantage would be great: Doubling the operating temperature would cut in half the cost of the heat produced, Forsberg says.

The next step, Forsberg says, will be to set up some full-scale prototype units to prove the principles in real-world conditions, something he expects will happen by 2020. “We’re finding the right customers for those initial units,” he says, which would probably be a company such as an ethanol refinery, which uses a lot of heat, located near a sizable wind-turbine installation.

Photo: One proposed application of the firebrick-based thermal storage system is depicted in this hypothetical configuration, where it is coupled to a nuclear power plant to provide easily dispatchable power. Courtesy of the researchers

Tags: Electricity ,Storage ,Nuclear ,Hydro ,Hydroelectric ,Wind ,Carbón
Add a comment
Robert
Great article we should look to the past more often for answers to the future .
panorama