Thursday, 18 April 2019
0
Dan McCue
The UK’s Arcola Energy, a clean-tech business working in hydrogen and fuel cell technology, has secured a 15,000-square-foot building for expansion in to the Liverpool City Region borough of Knowsley. 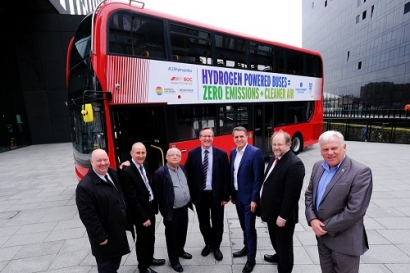 Dr. Ben Todd, CEO of Arcola Energysaid, "I look forward to working with all of our partners across the Liverpool City Region and beyond to contribute to delivering the clean air aspirations of the city region. On a personal note, I am delighted to be returning to my childhood home, fulfilling my dream of 20 years ago to build a clean-tech business in Liverpool city region.”

The new premises will house the company’s manufacturing, installation and maintenance facility. It will have the capability to build, install and service hundreds of zero-emission vehicle powertrain systems in the first year of operation. In recognition of the rapid ongoing expansion in both the

battery and hydrogen fuel cell electric vehicle market, sufficient space has been acquired to quickly expand to thousands of systems per year. As part of the expansion, Arcola Energy will also be upgrading existing powertrain development facilities in Hackney, London.

Arcola Energy supports vehicle manufacturers (OEMs) to develop, manufacture and deploy zero-emission commercial vehicles and has a 10 year track-record in hydrogen and fuel cell system R&D and engineering. The manufacturing area of the new site will first be used to produce and install hydrogen fuel cell systems in a fleet of double-deck buses to be deployed in Liverpool City Region supported by a £6.4 million award from UK Central Government’s Office for Low Emission Vehicles. The buses have been developed through a partnership between Arcola Energy and Alexander Dennis, the UK’s largest bus manufacturer and the largest double-deck bus manufacturer in the world.

Alongside buses and vans, the new facility will support production and aftermarket support of systems for trucks, trains, off-highway vehicles and marine vessels.

As with all Arcola Energy activities, the new site will support training and education in clean energy technologies, working with local schools and businesses to help build skills and awareness of future high-value jobs in zero-emission technologies.