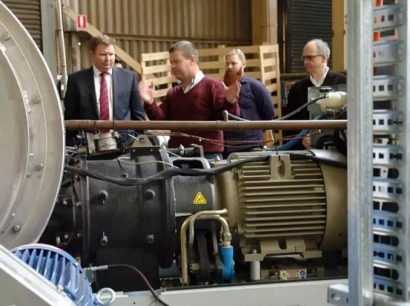 A prototype of the system had its first successful run on September 30, 2016.

By way of cost comparison, 1414 can build a 10MWh storage device for about $700,000. The 714 Tesla Powerwall 2s needed to store the same amount of energy would cost approximately 10X that amount, 1414 Degrees said in a news release.

Kevin Moriarty, a former chairman and managing director of zinc and gold miner Terramin Australia, joined the company late last year to help get commercial operations off the ground.

He says 1414 Degrees needs $10 million to $20 million to forward its plans, and is involved in “investment discussions” with several large energy companies.

The technology involved is unique in that it stores electrical energy by using it to heat a block of pure silicon to melting point – 1414 degrees Celsius. It discharges through a heat-exchange device such as a Stirling engine or a turbine, which converts heat back to electrical energy.

If the device stands up to commercial testing it could substantially reduce the costs of storing energy from solar and wind farms.

Rather than just sell its storage devices, 1414 Degrees wants to enter into joint ventures with customers – or partners – and share in the benefits.