Wednesday, 27 September 2017
0
Dan McCue
According to a recently published study, a major source of renewable energy is hiding in plain sight just waiting to be tapped. Researchers at Columbia University claim evaporation from US lakes and dams could generate 325 GW of power, nearly 70% of what the United States currently produces. 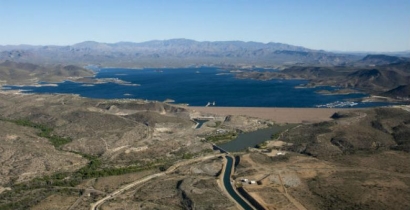 Though still limited to experiments in the lab, evaporation-harvested power could potentially be made on demand overcoming the intermittency problems encountered by solar and wind. The researchers’ calculations are outlined in the Sept. 26 issue of Nature Communications.

“We have the technology to harness energy from wind, water and the sun, but evaporation is just as powerful,” says the study’s senior author Ozgur Sahin, a biophysicist at Columbia. “We can now put a number on its potential.”

Evaporation is nature’s way of cycling water between land and air. Sahin previously developed a machine, the so-called Evaporation Engine, which can control humidity with a shutter that opens and closes, prompting bacterial spores to expand and contract. The spores’ contractions are transferred to a generator that makes electricity. The current study was designed to test how much power this process could theoretically produce.

The technology may have the added benefit of helping to conserve water. The researchers estimate that half of the water naturally lost from lakes and reservoirs through evaporation could be saved during the energy-harvesting process. In their model, that came to 25 trillion gallons a year, or about a fifth of the water Americans consume.

States like Arizona and Nevada could best capitalize on evaporation’s capacity to generate power and reduce water waste, in part because evaporation packs more energy in warm and dry conditions, the researchers say.

Klaus Lackner, a physicist at Arizona State University who was not involved in the study, expressed support for the team’s findings. Lackner is developing artificial trees that draw carbon dioxide from the air, in part, by harnessing the power of evaporation.

“Evaporation has the potential to do a lot of work,” he said. “It’s nice to see that drying and wetting cycles can also be used to collect mechanical energy.”

The researchers are working to improve the energy efficiency of their spore-studded materials and hope to eventually test their concept on a lake, reservoir, or even a greenhouse, where the technology could be used to simultaneously make power and save water.

The study’s other authors are Pierre Gentine, a hydrologist at Columbia Engineering and Columbia’s Earth Institute; and Xi Chen, a former Columbia postdoctoral researcher now at City College of New York. The work was funded by the U.S. Department of Energy, David and Lucile Packard Foundation, National Science Foundation and Wyss Institute for Biologically Inspired Engineering.

Photo: Energy harvested from evaporation can cut by half the amount of water lost to natural evaporation, researchers say.  Water-strapped cities with growing populations and energy needs could benefit most, including greater Phoenix, served by the above reservoir and irrigation system fed by the Colorado River. (Central Arizona Project)