Wednesday, 24 April 2019
0
Robin Whitlock
HyperSolar, the developer of a breakthrough technology to produce renewable hydrogen using sunlight and water, has announced details of its plan to build a pilot plant to demonstrate the commercial viability of its first generation system in a real world environment. 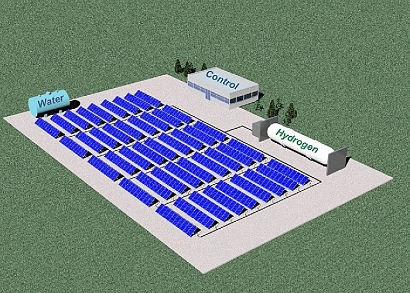 HyperSolar announced its intention to build a demonstration pilot plant in November 2018 and this has since been the focus of intensive effort in the laboratory as well as working with contract manufacturers and engineering firms for assembly and plant construction.  While its patented nanoparticle (Gen 2) technology is still in development, the Company’s management believes it can utilise its proprietary stability coatings and catalysts with readily available commercial solar cells encapsulated in panels with water (‘hydrogen generation panels’) to demonstrate a completely renewable hydrogen generation system at production pilot plant scale. The pilot plant itself will be a full plug and play facility featuring the Gen 1 technology. As the company’s more advanced and efficient GEN 2 units come available, GEN 1 technology can easily be replaced without changing the plant infrastructure.

The Company’s management is in discussions with contract manufacturers, engineering firms and industry partners that will provide critical input and service in the drive to completion of the pilot plant.

Ideally, the production pilot plant will be located at or near a distribution center where hydrogen fuel cell forklifts and materials handling equipment is being utilised. HyperSolar’s renewable hydrogen produced on site will replace a portion of the hydrogen produced using steam methane reforming that is current transported to the site. Steam reforming accounts for over 95 percent of the hydrogen production today and while the byproduct of the hydrogen is pure water, the manufacturing process still uses a fossil fuel, such as natural gas, and releases tons of carbon dioxide emissions into the atmosphere. HyperSolar’s process will be truly clean, using no hydrocarbons - only water and the power of the sun.

“We are very confident in moving forward resolutely in the completion of the pilot plant. Its construction and operation will lead us to commercialisation of this truly green technology - which we believe will eventually provide economically-viable, clean hydrogen, through a truly clean process, less expensively than ever before” said Tim Young, CEO of HyperSolar. “This plant will not only lead to the initialisation of our Gen I offering, but will help hasten the development of our truly game changing advanced Gen II technology.”

HyperSolar’s forward-looking, advanced Gen II research is focused on developing a completely renewable, low-cost and submersible hydrogen production particle that can split water molecules using the power of the sun, emulating the core functions of photosynthesis. Each particle is a complete hydrogen generator that contains a novel high voltage solar cell bonded to chemical catalysts by a proprietary encapsulation coating.