Thursday, 20 December 2012
1
Robin Whitlock
A new report from the Department of Energy & Climate Change (DECC) has confirmed Scotland smashed through its energy targets in 2011 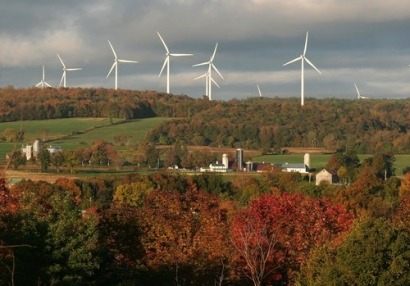 The report also states that Scotland is on track to go even further with its renewable energy achievements. Figures reveals that 36.3% of the electricity consumption in Scotland in 2011 came from renewable sources compared to an interim target of 31%. The Scottish government aims to generate 100% of its electricity demand from renewables by 2020 with a further interim target of 50% by 2015.

During the first three quarters of 2012 Scotland generated 15.2% more electricity than over the same period of 2011 leading to the conclusion that further progress can be expected when the figures for 2012 are published.

“These figures show that in 2011 Scotland smashed through previous records for renewable electricity and more than met the ambitious targets the SNP Government set” said SNP MSP Mike Mackenzie, a member of the Economy, Energy and Tourism Committee. “That is a fantastic achievement and is testament to the substantial and growing strength of the renewable energy sector. All the signs point to 2012 being a year that saw Scotland achieve even more in the renewables field and set even more impressive records.”

The growth in renewable energy in Scotland is contributing to the generation of thousands of jobs and hundreds of pounds of investment Mr Mackenzie added. Renewable energy is boosting local economies right across the country at a particularly critical time and although the Scottish government has hugely ambitious targets, the progress so far has been impressive.

Scotland is home to most of Britain’s hydroelectric power and during 2011 also generated 45% of UK total wind power output. Scottish companies such as the Pelamis Wave Power project are at the forefront of renewable energy generation in the UK and there is substantial inward investment, such as that by Areva which announced recently its intention to build a factory in Scotland for the offshore wind industry.

“The rapid growth of the sector is an example of what Scotland can achieve when we put our minds to it and I am excited at the further growth that everyone expects to see in renewable energy in coming years” continued Mr Mackenzie.