Tuesday, 22 December 2020
0
GenComm Program Manager Paul Mc Cormack today welcomed the first hydrogen powered buses entering service in Northern Ireland. Speaking at a launch event at Stormont attended by the Infrastructure Minister Nichola Mallon, Mc Cormack said, “Today is a momentous day for those of us who have been on this hydrogen journey for some time now. The fact the three double decker buses are set to enter service locally is excellent news. Our GenComm project aims to address the energy sustainability challenges of North West Europe by validating hydrogen technologies. Translink working with our GenComm partner Energia ably supported by funding from the Department for Infrastructure have helped bring about this day at Stormont.” 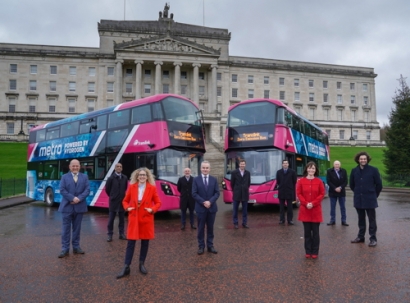 Energia Group Chief Executive, Ian Thom, said, “Energia Group is proud to be partnering with Translink on this innovative and pioneering project, which will directly reduce emissions in Belfast. We are working to power the double decker buses with renewable hydrogen and we will also be installing the first hydrogen fuelling station on the island of Ireland early next year.”

The fuel cell buses were purchased by Translink under a framework contract from Wrightbus. They will run on fully sustainable hydrogen which will be produced by electrolysis at one of Energia’s wind farms.

Energia is one of 10 partners on the £9.39 million GenComm project which has Belfast Metropolitan College as its lead partner.

Louise Warde Hunter, Principal of Belfast Met who lead the GenComm project stated, “Northern Ireland, as with most of the world, is on a green energy path as we strive to reduce our C02 emissions. I am delighted that Belfast Met is at the centre of this transition, today launching hydrogen powered public transport in partnership with DFI Minister Nichola Mallon, Translink, Energia and others. This is testimony of the Further Education sector’s vision for innovation, driving industry to new heights. We are proud that GenComm has been a catalyst for growth of renewable hydrogen in Northern Ireland.”