Wednesday, 13 November 2013
0
Dan McCue
Two scientists from the US have been awarded a $1 million prize for their efforts at the Bloomberg Fuel Choices Summit in Tel Aviv, Israel. 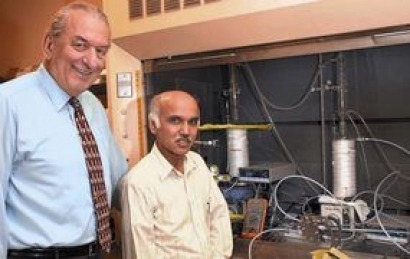 Professors George A. Olah and G.K. Surya Prakash, both of the University of Southern California in the US, are the recipients of the first-ever Eric and Sheila Samson Prime Minister's Prize for Innovation in Alternative Fuels for Transportation.

They were honored for their work and theories on developing a methanol-based economy. Israeli Prime Minister Benjamin Netanyahu bestowed the award Tuesday night.

The Samson prize is part of a national initiative launched by the Israeli government two years ago to encourage innovation in alternative fuels for transportation. Philanthropists Eric and Sheila Samson donated half the money for the prize, which will be awarded every year for the next decade.

In a written statement, USC President C. L. Max Nikias lauded the professors for their "pioneering and exceptional work."

“Their long-standing research has significantly advanced methanol markets and has helped the world develop viable alternatives to fossil fuels, which has important applications for transportation and other areas," Nikias said. "This prestigious award also speaks to USC’s long-standing commitment to supporting consequential research, particularly in the areas of science and technology.”

What Olah and Prakash propose is to use methanol to replace fossil fuels and petroleum-based feedstocks.

Though methanol can be produced from fossil fuels, it can also be produced from renewable resources, such as agricultural waste products. It also has the potential to be generated by recycling atmospheric carbon dioxide — setting up the possibility of a carbon-neutral fuel source, a statement from the university said.

The Wall Street Journal published an op-ed by Olah and USC Trustee Chris Cox on the methanol economy in its 10 October issue.

In bestowing the award, Prime Minister Netanyahu said, “Both of these great researchers and thinkers have made a significant contribution to our efforts. The goal is to attract the finest minds in the world to address this global challenge.”

In its coverage of the event, The Jerusalem Post noted the Israeli government wants to reduce the use of fossil fuel in transportation by 60 percent by 2025.