UK and subsidising electric cars: is it working so far?

Monday, 17 June 2013
8
Noor-Hal Cuellar
Let’s move from bio-ethanol to look into another sources of renewable energy, but still discussing about transportation. Transport has been identified as one of the main sources of human-induced greenhouse gas (GHG) emissions and fossil-fuels consumption (Lam & Louey, 2006). 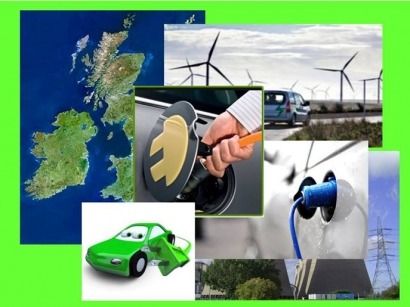 Domestic transport accounts for 22% of UK greenhouse gas emissions, being road transportation 20% of them. (DECC, 2011) The need to reduce CO2 emissions as well as oil scarcity have driven towards looking for alternatives as plug-in electric vehicles, that would shift current transportation energy demand to a certain extent from crude oil to electricity (Galus & Andersson, 2008). Two years ago, the UK government started offering grants up to £5000 (aprox US $7850) for electric cars, in order to increase the market share of electric vehicles. But the question is: is it the right strategy to do so? Let us analyse the different aspects of using electric vehicles.

Electric vehicles are widely publicized as zero carbon emissions, but this is true only at tailpipe emissions level and assuming they work with electricity provided from renewable sources. In a study made by Van Vliet et al. (2011) several electric vehicle (EV) configurations are compared based on their greenhouse gas (GHG) emissions and cost within 2015 scenario. Table 1 shows the different well-to-tank (WTT), tank-to-wheel (TTW) and total well-to-wheel (WTW) emissions (g CO2/km) from reference car configurations, using petrol, diesel and electricity produced by wind or pulverised coal subcritical power plants.

As shown, WTT emissions, depending on the electricity source, can impact the overall vehicle emissions.

Several authors have agreed that attitudinal barriers from the potential costumers are highly important inhibiting the adoption of cleaner vehicles. (Gould & Golob, 1998; Lane & Potter, 2007) Part of those barriers also comes from the perception of higher capital costs of electric vehicles compared with conventional ones.

Focusing our analysis in Nissan Leaf model (one of the designs subsidised by UK government) it has identified advantages as comfortable to drive, very quiet performance, even at speed. But drawbacks identified are limited range speed, long actual recharge time, as well as ludicrous price, even with subsidy. Potential battery life is another one. Currently Li-ion batteries have a calendar life of 5 years approx, so one mid-life replacement may be necessary. (Van Vliet et al., 2011; Reid, 2010)

So far, this has been one of the drawbacks from the slow market share increase the electric cars have gotten in UK. According to Massey (2013) top reasons consumers would not switch into EV from conventional is the “fear of losing power on the road”, and the lack of enough public plug-in points to replenish car battery charge.

There are several areas that need still further improvement to make electric vehicles competitive compared with the performance of conventional petrol vehicles, like increased motor drive efficiency, power density, and higher controllability and wider speed range. (Cheng et al., 2005) Timmermans et al. (2005) as cited by Van Mierlo et al. (2006), concluded in their LCA (where several batteries technologies were compared on a holistic approach) that Li-ion battery is the preferred option, regarding technical, economical and environmental aspects. Matheys and Van Autenboer (2005) obtained similar results. However, as shown by Figure 1, there are still many challenges for electrical energy storage systems in vehicles, not only technical. (Steiger, 2009) 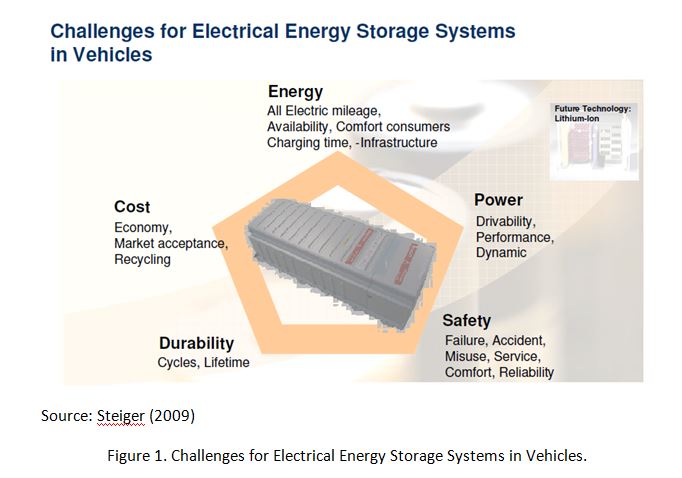 The economics and environmental impact of the use of EVs relies in well-to-wheel emissions, which depends highly on electricity mix. (Granovskii et al., 2006) Figure 2 shows that current electricity mix affect UK emissions per car to be almost similar to advanced hybrid combustion designs. (Citi, 2009). This matches figures from the King Review, that estimates current emissions of 80 g CO2/km and projected reduction to 30 g CO2/km by 2030 for predicted mix that includes increased renewable, nuclear and coal with CCS. (King, 2007 as cited by Offer et al., 2010). 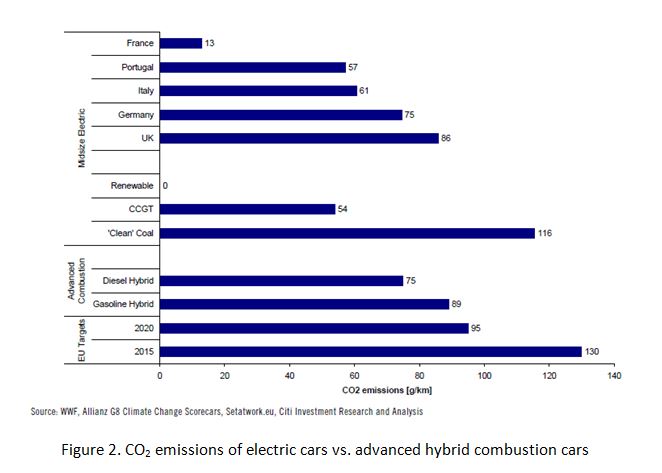 So basically two effects from EVs must be highlighted: the importance to have a reliable charging infrastructure and the improvement of the electricity supply mix, as well as reducing WTT greenhouse gas emissions. (CST, 2005) So far, this has been one of the critical issues in the UK and the reason why EV sales have fallen flat (from 111 in 2010 to 1,052 in 2011 and just 2,237 cars sold in 2012), as mentioned by Massey (2013).

Webster (1999) reviews three potential penetration scenarios, from a more conservative 0.1% to a highly optimistic 10%, brings to the table several issues. One is that several studies have projected that an EV increases household electricity consumption in an industrialised country by 50%. (Van Vliet et al., 2011). The second is that as higher the prospectus, higher the potential peak additional load due to increased customer demands. But it is quite important to involve the electricity distribution company when introducing a new EV scheme in order to devise the most appropriate charging system to the benefit of all stakeholders. (Wittenberg & Meurice, 1993) 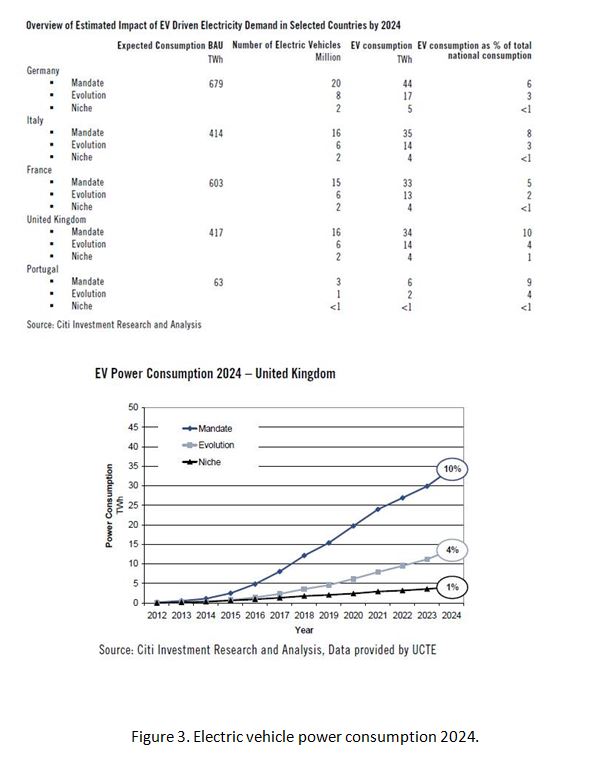 Based on the previous evidence, the assumption that electric vehicles could become a major contributor to the transport sector based on government grants is quite optimistic. As reviewed previously, there are several factors that affect the public perception and the spread use of EVs: lack of infrastructure for electric chargers, high capital costs, as well as operational drawbacks as reduced range speed. Also, if increase of renewable sources of electricity generation is not achieved while switching to electric vehicles, gain in overall CO2 emissions would not be significant to achieve the climate change targets. Economic incentives per se are not enough to stimulate behavioural change. (Lane & Potter, 2007) A potential feasible intermediate choice would be hybrid EV to overcome EV drawbacks while reducing CO2, and relying more in biofuels use.

It seems that our society is facing a similar scenario as the beginning of 20th century, when electric, steam and gasoline engine vehicles were competing to prevail. However, based on customer demand, their expectations and requirements regarding desired choice of vehicle, it is quite certain that conventional design will continue to dominate the automotive market at least in the short to mid-term. (Honda, 2010) Offer et al. (2010) conclude in their study that currently capital and running costs are higher for EV, but in a 2030 projection capital costs could drop significantly, but still the market share would be low. It is the challenge for UK transport policy, academic and industry research to propose innovative measures to help accelerate the shift to low carbon vehicles and fuels to help reaching UK climate change targets. (Lane & Potter, 2007) Without an integrative strategy to provide available charging infrastructure, as well as increasing renewable sources in power grid mix, subsidising EVs would not be enough to decrease CO2 emissions.

CST, 2005. An electricity supply strategy for the UK. Council for Science and Technology. [Online] May 2005. Available at: http://www.bis.gov.uk/assets/bispartners/cst/docs/files/whats-new/05-2179-electricity-supply-strategy.pdf [Accessed 15 June 2013]

Tags: Electric vehicle , Electricity , Transport , CO2 , Fuel , Hybrid , Fuel cell , Climate change , Hydrogen , Hydro , Oil , Belgium , Grid , Europe , Biofuel , Storage , Renewable energy , PV , Nuclear , Efficiency , Wind , Carbón
Add a comment
Lauren
In order to reduce vehicle pollution, many government has encouraged the bio-ethanol based transportation vehicle which is really great initiative. And pleased to find updates here regarding providing subsidy for producing electric cars but have some aspects to be discussed before manufacturing or moved from the bio-ethanol based vehicles. Lauren, A career consultant for Job seekers who are getting CV writing help at CV Folks - https://www.cvfolks.co.uk/
beach towels uk
latest beach towels range in home & garden. Fantastic quality, style and value. beach towels uk
jamss
nice post, keep up with this interesting work. It really is good to know that this topic is being covered also on this web site so cheers for taking time to discuss this! my page
Hosting24 Coupon
Great share, thank you. If you need some coupons for super cheap and reliable hosting - try Hosting24 and here are some coupons: http://is.gd/hosting24coupons
hi was just seeing if you minded a comment. i like your website and the thme you picked is super. I will be back.
Thanks for your post. I’ve been thinking about writing a very comparable post over the last couple of weeks, I’ll probably keep it short and sweet and link to this instead if thats cool. Thanks.
ceramic
I admire this article for the well-researched content and excellent wording. I got so involved in this material that I couldn’t stop reading. I am impressed with your work and skill. Thank you so much.cheap polished porcelain tiles
Lamont
Youtube
Youtube
I think this is a really good article. You make this information interesting and engaging. You give readers a lot to think about and I appreciate that kind of writing. https://www.youtube.com/user/blakkness16
pv