Wednesday, 21 February 2018
0
REM
Inspired by the mechanics of the human heart, a new type of wave energy conversion system developed in Sweden is now bobbing in the waves off Orkney, Scotland. It’s undergoing evaluation for survivability, loads and performance in off-grid operations, in order to validate the business case for full-scale implementation in target markets. 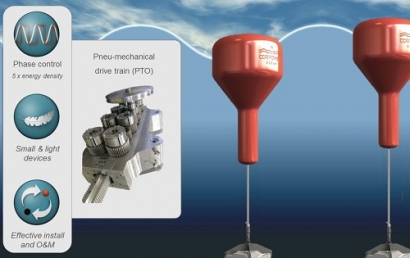 The project involves industrial and research partners from Portugal, Scotland, Ireland, Norway, Sweden and Germany, and is funded with a €6.5 million ($8 million) investment by InnoEnergy, the Swedish Energy Agency and Wave Energy Scotland. It’s also supported with another €4 million ($4.9 million) contributed by the European Commission’s H2020 WaveBoost project.

Developed by Swedish startup CorPower Ocean AB, the C3 wave energy converter system is based on research in machine design at KTH Royal Institute of Technology in Stockholm, as well as control technology at NTNU in Trondheim.

CorPower CEO Patrik Möller says that the C3 can take advantage of the full spectrum of waves, producing five times more energy per ton than other systems.

Known in the wave energy industry as a point absorber type system, the C3 consists of a buoy that absorbs energy from the waves, plus a drivetrain that converts the buoy motion into electricity. The unit is based on patents by Swedish cardiologist Stig Lundbäck, some of which are inspired by his research into heart pumping and control functions.

To convert the linear motion of the buoy into an energy-generating rotational motion, the system relies on a special rack and pinion gearbox developed at KTH.

In the CorPower wave conversion system, the rack is pushed up and down by the buoy bobbing on the waves. This action then moves eight small gear wheels along the rack. The secret to the cascade gear design is how the pinions and the gears work together along with flexing units. Eight pinions share the force from the rack, which is evenly distributed with the help of a patented system that “ensures extreme levels or robustness required in the harsh operational environment,” Möller said.

Stefan Björklund, Associate Professor at KTH, said the flex units are a key feature for the cascade gearbox.

Möller added the C3’s performance was proven in grid-connected configuration during a dry testing campaign at KTH last year. The system is now connected to a floating microgrid unit provided by the European Marine Energy Centre in Orkney, Scotland. The microgrid enables the C3 device to behave as if it were grid-connected by providing a stable voltage and frequency reference, simulating the impedance of a typical grid connection, which absorbs power from the device under test and provides power to auxiliary systems.

Once the ocean demonstration in Orkney is completed, the next stage is designing, manufacturing and testing the first full-scale converter in a Stage 4 demonstration project that will run from 2018 to 2020, Möller concluded.