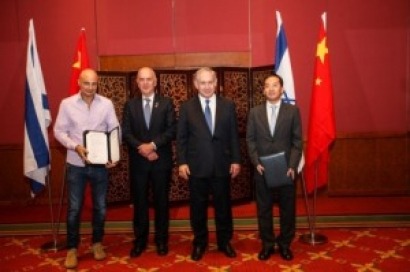 In a written statement released last week, the company said its new subsidiary wwas established with an investment from a Chinese government fund that provides funding for EWP's first 100 KW grid connected plant, to be completed by the end of the year.

"We believe that China is being very innovative by replacing some of its coal and other polluting methods with renewables such as solar, wind and now wave energy," said company founder and CEO David Leb. "Suzhou Eco Wave Power Technology is happy to be part of China's renewable energy mix, and we are hoping that other countries will follow."

Suzhou Eco Wave Power Technology was able to secure consent to construct a pilot plant in Zhoushan Island, and is in advanced negotiations regarding additional 50 MW projects in Zhejiang. EWP's commercial scale power plant will be the first of its kind.

Suzhou Eco Wave Power Technology is part of EWP's corporation, which was established in 2011 and became a significant player in the wave energy industry with a current pipe-line of 99MW, 50MW of which are planned to be in China. EWP's technology won the Frost & Sullivan Innovation Award, the Energy Globe Award and additional recognitions worldwide.

With over 18,000 km of coastline and approximately 6500 islands, China is believed to be one of the biggest markets for wave energy. The theoretical mean power of wave energy resources along China's coasts reaches 12852.2 MW, with most massive resources in Taiwan, Zhejiang, Guangdong, Fujian and Shandong.

Previous testing of Hydraulic systems in actual sea environment in China showed that conversion efficiency of Hydraulic system is higher than 50 percent (as compared to 15 percent -20 percent of wind and solar), and the quality of the output power can be used directly. For additional information: