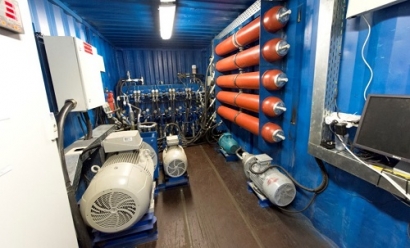 By installing the EWP pilot project in Gibraltar,which was made possible thanks to an efficient collaboration of Eco Wave Power with the EU Regional Development fund and the Environmental Department of Gibraltar led by Prof. John Cortes, Minister for Education, Heritage, Environment, Energy and Climate Change and Dr. Liesl Torres, the Chief Scientist of Gibraltar, Eco Wave Power was able to demonstrate a breakthrough in the wave energy industry.

Most of the power plant of EWP is located on land (in the tunnel, in the case of Gibraltar) and operates just like a regular power station. Since the installation, EWP implemented upgrades to the connections and storm protection mechanisms and such updates were successfully implemented in the recent storm in Gibraltar in January, 2018, when wave height reached in excess of 6 meters (twice as high as the height of the jetty) and no damage was caused.

EWP has already filed for and registered 13 new patents which are significantly derived from the Gibraltar pilot experience.

Currently, Eco Wave power is reviewing the possibility of creating a blockchain-based knowledge sharing platform, where EWP and other wave energy developers will be able to share their theoretical and practical experience from their installations, in order to assist the commercialization of wave energy around the world.

Tags: Wave , Grid , Transport , Climate change
Add a comment
Ernest Kajal
For what it\'s worth, output data for the Gibraltar wave plant *is* available: the Minister for the Environment, Energy, Climate Change and Education of Gibraltar (Hon. Dr J E Cortes), explained in parliament that \"The wave generator average monthly output since 1st June 2017 has been 82.5 kWh. Peak output was 3.2 kWh.\" So, 3.2 kWh peak and about 0.1 kW average. Not *quite* 100 kW. I\'m in full agreement with Erik: there are a lot of fake news and unsavory business practices surrounding the EWP project, and indeed these are causing grave damage to the reputation of the sector.
Erik Friis-Madsen
@Aron, Many WECs have passed 15.000 hours of grid connected operation years ago and severel has reported production data. Max I haven\'t been able to find any production data from EWP. This kind of fake news is definitely damaging the public image of the wave energy sector!
Max Carcas
@Aaron I agree with Tom and Yago - I can\'t see any data that shows how much electricity has been produced into the grid from this installation. \'Grid-connected hours\' is an important milestone but pretty meaningless without MWh generation figures. And data showing how much electricity has been generated is available for both Mutriku and Limpet (and Pelamis for that matter).
Yago Torre-Enciso
I fully agree with Tom Heath. Mutriku wave power plant, supplied by Wavegen-VOITH Hydro, was inaugurated in July, 2011. It was out of running a bit more than two months at the beginning of 2012, and since then it has been running connected to the grid with no interruption. Therefore Mutriku hasn\'t reached the LIMPET record yet, but is on the path. Tom, happy to hear from you.
Aaron Jones
Tom, what you are saying is speculative, that is because non of the companies you mentioned ever disclosed actual production data. Therefore they can even claim they have been producing more energy than the sun, as long as they are not subtantiating it with data and proof. In this case Eco Wave Power has achieved an amazing feat. Not only it has reached a big production milestone. All of its kWh\'s that it has been producing are transmitted to Gibraltars grid under a signed PPA. Thus, enabling a commercial connection which is not the case for the majority of other wave power producers.
Tom Heath
Theclaim to be the world\'s longest running grid connected wave energy device is nonsense. Both the now commissioned LIMPET OWC on Islay and the still operating plant at Mutriku Spain can claim almost an order of magnitude longer. LIMPETran for twelve years notching up well over 100,000 grid operating hours and if it hasn\'t already the Mutriku plant will soon surpass this.
pv