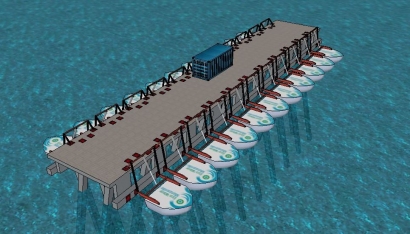 The announcement of the start of construction follows the company's procurement of an interconnection approval from the National Energy Control Center in Mexico.

The approval is for an overall initial capacity of 25 MW, and the company said it plans to execute it gradually, starting with a 4.1 MW wave energy power plant.

The power plant will be located in the Cuyutlon/ Tepalcates Beach in Manzanillo, State of Colima, which is, along with the Municipality of Manzanillo, are the potential off takers of the energy that will be generated.

The project led by Eco Wave Power Mexico is already in an advanced phase. The company purchased 5000 square meters of land for its machinery and conducted all relevant studies, including an environmental study, wave study, bathymetry and soil mechanicals.

Eco Wave Power Mexico also submitted the executive project to SCT and is pending for the last approval, which is the authorization of works by SCT (Ministry of communication and transportation) and Generation permit by the Energy Regulatory Commission.

In order to execute these  steps, EWP Mexico raised the first  $1 Million for the project; and intends to raise additional $12 million within the next six months.

"We are very excited and looking forward to receive the remaining permits and start the construction of EWP's first power plant in Mexico," said EWP co-founders David Leb and Inna Braverman

Eco Wave Power Mexico  CEO Ernesto Delarue said, "This is a great honor for Mexico to be among the first countries in the world and the first in the Americas to generate electricity from ocean waves."

Eco Wave Power's technology has been under development since 2011. The company has an operational power plant in Jaffa port for 3 years, which received a Pioneering Technology status from the Chief Scientist of the Energy Ministry of Israel Dr. Bracha Halaf.

This station was co-funded by the European Union and is a part of a total planned capacity of 5 MW, which will provide up to 15 percent of all Gibraltar's electricity needs.