Friday, 13 January 2017
0
Robin Whitlock
The European Marine Energy Centre (EMEC) has been invited to visit ‘blue silicon valley’ in Qingdao, China, to discuss the development of a ‘Chinese EMEC’ (CMEC). 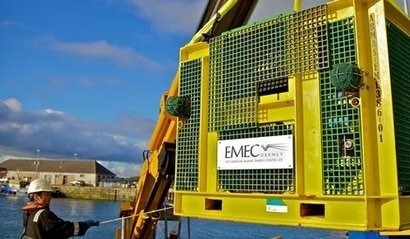 The Prosperity Fund project, supported by the UK Foreign and Commonwealth Office and China Britain Business Council (CBBC), was set up to help progress policy support in China towards developing a demonstration site to facilitate innovation in wave and tidal energy. It involves EMEC providing feasibility studies around the creation of a CMEC facility as part of a brand new £200 million (2 billion Yuan) marine laboratory campus in Shandong Province, China.

Qingdao National Laboratory for Marine Science and Technology will serve as the base for the project, drawing researchers from a number of Chinese universities. An ocean energy demonstration site has already been identified as a key aspect of the lab’s innovation activities.

Following an initial workshop in Orkney in October this year, Neil Kermode, EMEC’s managing director visited the new lab in Qingdao this month to take part in a follow-up workshop, part of the ‘Aoshan Forum’:

“EMEC has more than a decade of experience in the design, build and operation of its marine energy test facilities with more wave and tidal devices having been tested at EMEC than anywhere else in the world (27 devices from 17 companies from 9 different countries)” said Mr Kermode. “This important R&D activity has created a UK-wide boost to innovation in the maritime economy supply chain which is world-leading and already exporting its knowledge and expertise. The maritime capabilities in and around Qingdao are astonishing, and China has a very strong stance on tackling climate change. Combined, this makes marine energy an interesting and important endeavour for their researchers. We met several academics who are already developing technologies and the new laboratory campus in Qingdao gives them a perfect base from which to progress their innovations. We’ve been met with a real appetite in China to learn from the experience gained over the last decade at EMEC, and we’re keen to continue building collaborative R&D and innovation links between the UK and China to help drive the development of ocean energy on a global scale.”

James Brodie, Director of Energy at CBBC, added that with the inclusion of marine energy in China’s 13th Five Year Plan, and ambitious targets, marine energy is an emerging sector that the country would clearly like to see developed rapidly but significant gaps remain in their innovation infrastructure to make this a reality. As the world leader in marine energy, the UK is in a fantastic position to support and benefit from this development by engaging at an early but crucial stage.