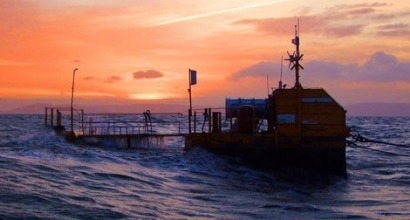 The project has emerged as a result of the recently signed five-year lease agreement between FAU and the US Department of the Interior’s Bureau of Ocean Energy Management (BOEM).

The lease will allow installation of multiple anchored floating test berths on the US outer continental shelf, 13 miles (22 kilometres) offshore from Broward County, Florida. Each berth consists of a buoy anchored to the sea floor allowing ocean current prototypes, of up to 100KW generation capacity, to be deployed from vessels moored in the Gulf Stream for a few weeks at a time.

“This project is a potentially paradigm-shifting development in the global quest for clean energy sources and puts South Florida at the forefront of research in this critical effort” said FAU President John Kelly. “It also demonstrates the multidisciplinary nature of marine renewable’s research, a successful public, private partnership and FAU’s international leadership in the field.”

BOEM Acting Director Walter Cruickshank added that it will be the first time a lease has been issued to test ocean current energy equipment in Federal waters. The Gulf Stream contains a tremendous amount of energy and therefore the project represents a significant opportunity to further expand US renewable energy potential. Industry partners will be able to evaluate the efficacy of their turbine designs while mooring buoys collect measurements of nearby ocean conditions.

FAU’s SNMREC has been working since 2007 to establish the world’s first offshore ocean current turbine test site. A successful final sea trial of the first test berth buoy was concluded in late 2013 along with preliminary tow tests of a small scale research turbine. BOEM will review a project plan before installation of the first test berth, planned for later this year. The project is supported by close to $20 million in funding from the US Department of Energy, the State of Florida and various private companies.