Wednesday, 22 May 2013
0
Robin Whitlock
Eco Wave Power (EWP) will establish an enterprise in China in order to promote the company’s technology throughout the country 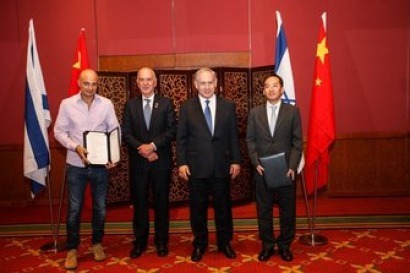 Eco Wave Power representatives arrived in Beijing last week in order to sign a joint collaboration agreement between EWP and the Chinese Government. The occasion was marked by an official signing ceremony and attended by high ranking members of the Israeli and Chinese governmental business sphere including the Israeli Prime Minister Benjamin Netanyahu and ambassador to China Mr Matan Vilnai.

Under the terms of the agreement Eco Wave Power will establish a local WFOE (Wholly Foreign-Owned Enterprise) named Eco Wave China (EWC) which will promote EWP’s technology in China as well as helping to develop local production facilities. EWP will be allocated an office and factory space in order to accomplish this as well as receiving financial support for a period of 2 years.

The initial investment in the new venture will be 5 million RMB, 4 million to be provided by the Chinese Governmental Fund and 1 million by Eco Wave Power. EWP China will raise additional funds in order to execute its commercial-scale projects. The agreement follows a series of similar agreements by EWP over the last year including, in 2012 the company an MOU signed with the Ocean University of China. The company also won the Frost & Sullivan Product Innovation Award among other achievements, the details of which will be revealed by the company later this year.

“If taking into account China's great advantage in having a large-scale wave energy resource, and its disadvantage of insufficient power production and related pollution, it is clear that Eco Wave Power's wave energy solution may become one of the leading energy production methods in China, providing this great country with not only clean, but also cost efficient energy generation method” said David Leb, founder and CEO of EWP. “Eco wave power is happy to be part of China's renewable energy mix, and we are hoping that other countries do the same.”

China has 18,000 km of coastline and at least 6000 islands and so wave power technology is especially attractive. The country also expects to face an increase in power supply shortages this year due to the shortage of coal and the China Electricity Council (CEC) expect this to reach a shortfall of 70 million kilowatts in 2013 compared to only 30 million in 2011. Furthermore, according to the US Energy Information Administration (EIA) China burns almost as much coal as the rest of the world combined. This amount is set to rise continuously given that since 2000 China has accounted for more than 80 percent of the global increase in coal use.