Wednesday, 20 May 2015
0
Robin Whitlock
Marine energy company Minesto has been awarded a 13 million euros investment from the European Regional Development Fund for the commissioning of the first commercial Deep Green power plant. 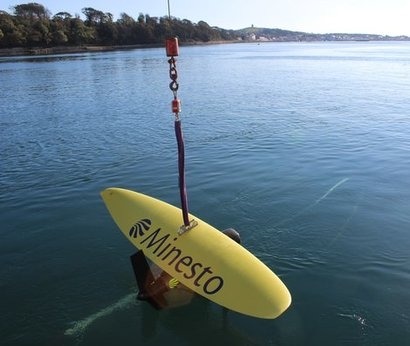 The funding was awarded by the ERDF through the Welsh Government which manages the delivery of the EU Structural Funds programmes in Wales. It is aimed at supporting an expansion of marine energy in Wales and the UK and also covers the establishment of Minesto’s UK headquarters.

Minesto will install the first commercial scale 0.5 MW power plant in Holyhead Deep and continue with additional deployments in order to establish an array with a total capacity of 10 MW. The company’s Deep Green marine energy project is located in Holyhead and looks like an underwater kite. It is based on an innovative new approach for electricity generation from tidal and ocean currents and is expected to become operational in 2019. It will supply electricity to the equivalent of 8,000 households, creating significant employment opportunities in both the construction and operational phases.

“Establishing Minesto UK Headquarters in North Wales is a strategic decision that will help make Wales a global leader in the marine energy sector” said Anders Jansson, CEO of Minesto. “In the short term, around 30 direct jobs will be created, followed by hundreds more in the long term in areas like manufacturing, offshore operations and new project development. Today’s announcement represents an important step into the full commercialisation of marine energy in Wales.”

Welsh First Minister Carwyn Jones added that Wales has extensive raw wave and tidal energy resources along its shorelines and that the investment will help to create greener and more efficient sources of energy while creating jobs and vital opportunities for growth.

The Welsh Government and Minesto have been working together for a number of years, carrying out feasibility studies to help bring investment to North Wales. The country has a whole has 1,200 kilometres of coastline with low velocity tidal currents which could potentially supply more than five percent of the UK’s total electricity demand. Wales also has strategically located deep-sea ports and access to the UK national grid. According to a report commissioned by the Welsh Government, 1GW of deployed marine energy could boost the Welsh economy by up to £840 million annually.

Minesto was awarded an ‘Agreement for Lease’ in July 2014 for a commercial demonstration site for electricity production from tidal currents near Holyhead Island. The location is known as Holyhead Deep and consists of a seabed area west of Anglesey. It was first identified by the company as a perfect location for a commercial Deep Green installation, with help from another EU funded project, SEACAMS,   in 2012. The area benefits from excellent port facilities in Holyhead Port, onshore grid connection potential at Holy Island, good transport links and access to installation and maintenance services, as well as strong local support for marine energy. It meets all of the physical requirements, providing low-flow tidal velocities at a depth of 80-100 meters, just a short distance from the shore.

Deep Green is the only proven marine power plant to generate electricity from low velocity tidal currents, which greatly enhances the potential for marine energy. The system has been generating electricity in the waters off the coast of Northern Ireland for almost two years and has been widely acknowledged as a major breaththrough for the entire renewable energy industry.