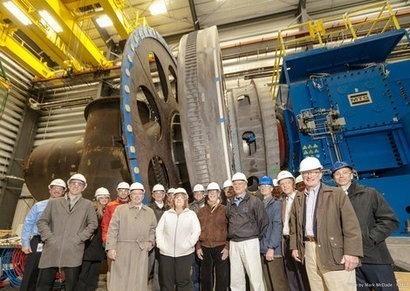 NREL is working with Columbia Power Technologies' StingRAY wave energy converter, which has been designed to deliver electricity at a competitive cost while having a low environmental impact. Mechanical testing of the StingRAY generator, which is as tall as a two-story building and the largest generator ever tested in an NWTC dynamometer, is now under way. Over the next few months, the unit will be connected to the NWTC's Controllable Grid Interface for electrical performance characterisation.

“Though designed to benefit the wind industry, the NWTC's large dynamometer facility is being leveraged to help advance new ocean energy technology” said NWTC Director Daniel Laird. “While still in the early stages of development, ocean energy is progressing rapidly. Over the coming decades, ocean energy could become a major source of electricity powering high-population-density areas near the coasts.”

Columbia Power Technologies CEO Reenst Lesemann added that the StingRay is being tested at NREL because the core design is similar to a wind turbine in that it is direct-drive but with a very large diameter. The dynamometer can mimic the sea with back-and-forth oscillation and so will put the generator through its paces to ensure it can withstand ocean forces.

According to NWTC project manager Mark McDade, NWTC is one of the only facilities in the country with a dynamometer that can apply rotational torque at the speeds and forces required while also applying non-torque loads, which are side forces that simulate the action of a rogue wave hitting a wave energy converter in the ocean. This matters because the structures of these energy conversion devices must be designed to handle the side forces without damage. The work is pioneering in the field of ocean energy conversion.

The land-based validation effort, which is co-sponsored by Columbia Power Technologies and the Department of Energy's Water Power Technologies Office, will occur prior to an open-water demonstration of the system scheduled for 2017 at the US Navy's Wave Energy Test Site in Hawaii.

NREL is the US Department of Energy's primary national laboratory for renewable energy and energy efficiency research and development. NREL is operated for the Energy Department by The Alliance for Sustainable Energy, LLC.