Wednesday, 26 June 2019
1
REM
Ocean Power Technologies, based in New Jersey, has received a U.S. patent for its Power Take-Off System which is the mechanical heart of the PB3 PowerBuoy®. 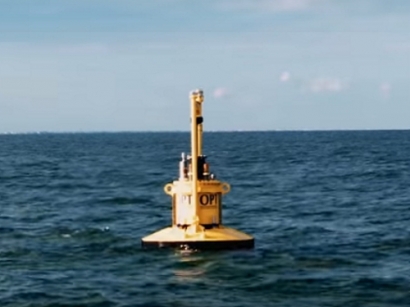 Ocean waves that pass-by the PowerBuoy create a relative linear motion between the float and the spar components of the PB3. The PTO system takes the linear motion of the float through the input shaft and converts it into rotary motion via a ball-screw. The ball-screw drives a generator that produces electrical power thus completing the wave energy to electrical energy conversion.

George H. Kirby, President and Chief Executive Officer of OPT, said, “This new patent provides significant additional protection for our proprietary technology that enables the PowerBuoy to be deployed and to perform autonomously in the toughest waters in the world.”

The PTO system has a mechanical efficiency of more than 90 percent and an expected minimum three years between service for continuous operation in the most severe environments, including the North Sea. The PTO system also contains a mechanical brake for locking the buoy during transportation and under storm conditions to prevent damage to the components.

This patent includes two different designs of the PTO system. The first design offsets the input rod and the ball-screw axes, which is currently being manufactured and deployed. The second design is based on a concentric input rod and ball-screw arrangement, which further simplifies the system and may be used in future PB3 PowerBuoydeployments.

Outside of the U.S. the company has been issued 237 patents across 13 countries with 37 of the active U.S. patents having at least one corresponding issued foreign patent. The company’s patent portfolio includes patents and patent applications with claims directed to system design, control systems, power conversion, anchoring and mooring, and wave farm architecture.

Add a comment
G.
How can you patent a ball & screw???? They\'ve been used for this for decades!!!
energy saving