Wednesday, 23 October 2019
0
Robin Whitlock
Orbital Marine Power has announced a strategic contract with SKF for the supply of the fully integrated power trains on its O2 2 MW floating tidal turbine. 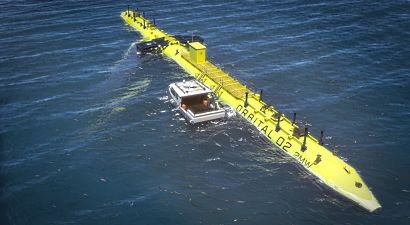 The O2 will become the world’s most powerful tidal turbine when it enters operation at the European Marine Energy Centre (EMEC) in Orkney in 2020. The contract provides Orbital with access to the resources of one of Europe’s largest OEMs, with an annual turnover of over £6 billion in global equipment sales and services. This latest announcement builds on an existing agreement which sees the blade pitching hubs for the machine also being supplied by Swedish headquartered SKF.

Orbital has been working with SKF for the supply of critical bearing and sealing components since 2011 in both its 250 kW unit and the SR2000-2MW unit, which produced in excess of 3 GWh of electricity over its initial 12-month continuous test programme at EMEC. However, the commercial supply arrangement for the O2 2MW turbine is a departure from the historical component supply model to one where SKF is providing Orbital fully integrated drivetrain solutions covering both nacelles and pitching hubs for the world’s most advanced tidal turbine.

“At Orbital Marine we are about delivering a total, innovative solution that enables low cost tidal stream energy” said Orbital Marine’s CEO, Andrew Scott. “Commercialising our technology will create an entirely new global market for power generation equipment and services and we are delighted to be working with SKF to unlock this.”

Michael Baumann, Business Development Manager Marine and Ocean Energy at SKF, added that the company has been a technical partner to advanced tidal turbine device developers for almost a decade now and that the company sees tremendous potential for floating tidal technology due to its low installation and operating costs.

Orbital’s contract with SKF follows recent contract awards as part of the overall build programme for the O2; these include the O2 manufacturing contract to TEXO Group in Dundee and an anchors contract to FAUN Trackway in Anglesey.