Monday, 30 October 2017
0
Dan McCue
An engineering team at Sandia National Laboratories has designed, modeled and tested a control system they say doubles the amount of power a wave energy converter can absorb from ocean waves, decreasing the cost of power produced from wave energy. 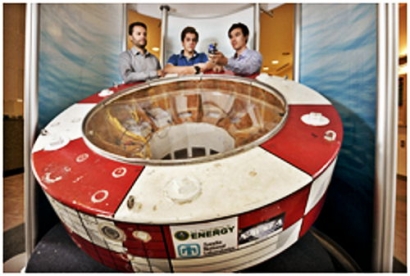 During a multiyear project funded by the Department of Energy’s Water Power Technologies Office, the engineers, from Sandia’s Water Power program, are using modeling and experimental testing to refine how a wave energy converter moves to capture wave energy while also considering how to improve the resiliency of the device.

Sandia engineer Ryan Coe said the researchers are “working to create methodologies and technologies that private companies can harness to create wave energy devices that will enable them to sell power to the U.S. grid at a competitive price.”

Sandia’s wave energy converter is a 1-ton ocean buoy with motors, sensors and an onboard computer built at a scaled down size for testing.

“These devices can be in open ocean and deep water, maybe 50 to 100 miles off the coast,” Coe said. “An array of wave energy converters, maybe 100 devices, connected to an underwater transmission line would send the wave energy back to shore for consumption on the grid.”

Sandia’s previous testing focused on studying and modeling how the devices moved in an ocean-like environment to create a numerical model of their device. Using the model, the team wrote and applied multiple control algorithms to see if the converter could be made more efficient.

The control system uses a feedback loop to respond to the behavior of the device by taking measurements 1,000 times per second continuously refining the movement of the buoy in response to the waves. The team developed algorithms to control the buoy then tested which control system would get the best results.

Sandia engineer Dave Patterson said. “Different controls will work better for different machines, so a large part of this project is figuring out which control algorithm works and how to design your system to best take advantage of those controls.”

Results from numerical modeling with the control algorithms showed a large potential, so the team took the converter to the U.S. Navy’s Maneuvering and Sea Keeping facility at the Carderock Division in Bethesda, Maryland, in August to test the new control methods in an ocean-like environment.

The team ran a baseline test to see how the converter performed with a simple control system directing its movements and actions. Then they ran a series of tests to study how the various control algorithms they had designed affected the ability of the device to absorb energy.

The tests showed theory matched reality in the wave tank. The control algorithms were able to substantially increase the amount of energy the converters were able to absorb.

The team is analyzing the testing data and considering further options to refine the control systems to maximize energy transfer.