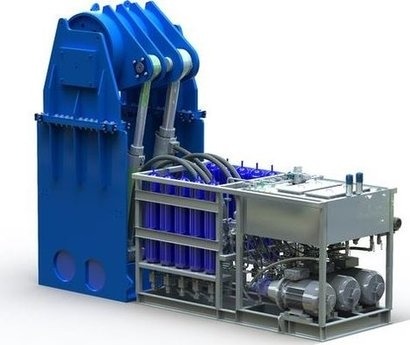 WavePOD aims to develop a standardised subsea unit which can be attached to a variety of different wave energy devices, converting the movement of the devices into electricity. A tenth-scale WavePOD prototype has now been constructed and is undergoing testing at the Fluid Power Drives and Controls (IFAS) at RWTH Aachen University, Germany.

The funding will enable the WavePOD team to complete testing of their scale prototype and deliver the design and specification for a full-scale prototype WavePOD.

“The WavePOD project addresses head-on one of the major challenges in the wave energy sector - how to convert the motion of a wave machine into electricity, both reliably and cost effectively” said Aquamarine Power Chief Executive Officer Paddy O'Kane. “From the outset we have worked with Bosch Rexroth to ensure WavePOD will be applicable to a wide range of technologies.  The very welcome involvement of Carnegie Wave Energy and the investment by Wave Energy Scotland means we can now take our plans on to the next stage.”

Mr O’Kane added that WavePOD has already generated extremely positive results from the tenth-scale prototype and that the project is now in an ideal position to build on its success.

The prototype consists of a drive train, cylinder frame and power take off. It has been developed by Bosch Rexroth and Aquamarine Power with funding support from the Scottish Government's Marine Renewables Commercialisation Fund (MRCF), managed by the Carbon Trust. The project has also attracted support from some of Europe’s leading wave energy developers, utilities and academic institutions.

Tags: Wave ,Marine ,Wave Energy ,Electricity ,Europe ,Germany ,Carbón
Add a comment
Jolly
You've got produced some decent points there. I looked around the net for further information but the information you provided us is very different from all others. It is very useful for me and i will only say thanks to you for sharing this all. Get good quality of safety mats online from http://safetymatsuk.co.uk/
¡Suscríbete!
biogas