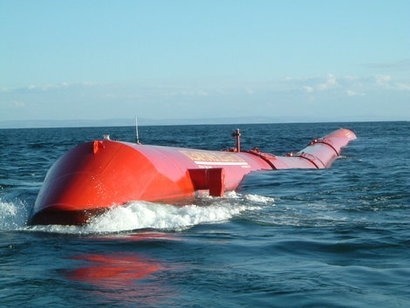 Wave Energy Scotland has awarded its first contract to a group of former Pelamis employees led by former Pelamis Chief Executive Richard Yemm. The aim is to develop the knowledge and experience acquired by Pelamis so that it can benefit the wider wave energy sector.

“I am very pleased to offer a significant budget of over £14 million to kick start Wave Energy Scotland” Mr Ewing said. “This is the biggest technology development programme the wave sector has ever seen. We have adopted a completely new approach to funding the sector. It is one that will foster collaborative research and development and will encourage technology developers to work with large engineering companies, academics and each other to address shared challenges. As Professor Stephen Salter, the founding father of wave energy, said, “Developers need to be in alliance with each other against the hazards of the sea rather than fighting one another for inadequate funding.”

Mr Ewing added that he is very glad to have succeeded in the aspiration to capture the know-how from device development and retain some of the best brains working in marine energy in Scotland. Last month, Highland and Islands Enterprise (HIE), on behalf of WES, successfully acquired the intellectual property and a range of physical assets previously owned by Pelamis.

Alex Paterson, Chief Executive of Highlands and Islands Enterprise, said he is pleased to have received confirmation of the budget for WES which offers a great opportunity to draw on the expertise of industry and academia.

The Scottish Government is supporting the development body with funding of £1.3 million in the current financial year and £13 million in 2015/16. The £1.3 million for the current year will cover the costs of establishing the new entity and acquiring intellectual property and other asses from Pelamis. The £13 million funding will allow WES to offer five funding calls worth £10.5 million to address a range of technology priorities, including power-take off systems, control systems and moorings and foundations. It will also enable WES to recruit a small staff team of around 10 to 12 employees along with an industry-led advisory group.

HIE’s Head of Offshore Development, Tim Hurst, has been appointed interim director of Wave Energy Scotland and will be leading the development of its operating model. Announcements of the first project calls and the recruitment of core staff are expected shortly.

There will be an open and competitive recruitment process for staff and a call for the advisory group in March 2015.

Highlands and Islands of Scotland (HIS)

Tags: Wave ,Wave Energy ,Marine ,Marine energy ,Offshore
Add a comment
News Skeptic
Complete waste of limited moneys. This rewards the losers. Why pay for Pelamis IP? It is being abandoned. Why not pay for all failed wave energy IP, then? This is job security for those who have failed in their efforts. This would not happen in the U.S. This is also unfair to all others working very hard in the ocean energy field. This is government favoritism, and corporate welfare, nothing less. Pelamis was not operating as a 'non-profit', so why do its people need a safety net and bailout, but others do not?
Subscribe!
electric/hybrid