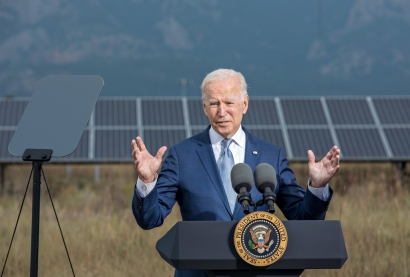 “That’s why my Build Back Better plan calls for significant new investments in upgrading research infrastructure, laboratories all across the country.”

During his speech, the president said the government should set more ambitious goals for reducing emissions and mitigating the effects of climate change. That’s why he has “set a course for the United States to achieve 50 to 52% reduction in greenhouse emissions by 2030 and for us to reach that net-zero emissions — economy-wide, across the board — by 2050.”

Gov. Jared Polis also spoke at the event, saying, “Achieving 100% renewable energy in Colorado by 2040 is a vision that we are making a reality. I thank the Biden administration for being Colorado’s partner in the fight against climate change.

Biden toured the NREL facility and said, “We’ll be making one of those breakthroughs in solar, wind, and storage  — out of these facilities … and drive down the costs of renewable energy.”

He went on to say the goals that were set to combat climate change when he was vice president are now out-of-date.

The president spoke about his visit to California to tour the site of the Caldor fire, “and in the last two weeks, I traveled to Louisiana, New York, and New Jersey to see the destruction from Hurricane Ida.  More people [were] killed in New York with flooding, 20 inches of rain, than were killed when 178-mile-an-hour winds hit Louisiana.

“And even if it’s not in your backyard, you feel the effects.”

“The bottom line is: It’s everywhere.  It’s everywhere.  Communities that nearly one in three Americans call home have been struck by weather disasters just in the past few months,” the president said, referring to the effects of climate change.

Biden said he wanted to create a “Civilian Climate Corps — I’ve been pushing that for a long time.

“Yesterday, I visited the National Interagency Fire Center in Idaho where we coordinate our federal fire response to wildfires.  They told me that the Civilian Climate Corps would make an enormous difference by cleaning away combustible underbrush that enable fires to spread, and by planting trees to fight climate change.”

“To reach our carbon goals, and the goals of the nation, it’s going to take the kind of collaboration we see here at NREL. Our industry is eager to work on this clean energy transition, and Xcel Energy is doing so with our employees and communities in mind. Our partnership with our employees and the International Brotherhood of Electrical workers is critical as we continue to move toward clean energy resources,” he said.

Biden concluded his speech saying, “Ladies and gentlemen, we can do this.  This is the United States of America. Never have we failed to meet an objective we set...And we’re not going to fail now because of all of you.”