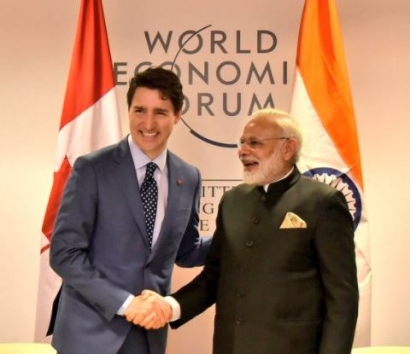 In a keynote address that focused primarily on globalization and the "worrisome" trend toward protectionism in the United States and elsewhere, Modi said his government wants to produce 175 GW of electricity from renewable sources by 2022.

This includes 100 GW from Solar Energy and another 75 GW from Wind and other sources.

Since 2014, India has been growing its renewables sector expeditiously and now produces 60 GW of electricity from renewable sources annually, he said.

"In our culture, we treat the Nature as mother," Modi said. "We also believe that man only has the right to milk it; not to destroy it.

"That is why, through the Paris Agreement, we have assured the global community that our development process would be entirely in line with our cultural ethos towards environmental safeguards," he continued. "In fact, we are not only aware of our responsibilities towards climate change; we are willing to take lead in mitigating its effects.

The prime minister also touted India's role in fostering the creation of the International Solar Alliance, a coalition of countries which are rich in solar radiation.

"The effort is to make them engage with each other to mitigate the hurdles and promote the enablers in solar energy. At present, 121 countries are its members. 48 countries have now signed and 19 have ratified the framework agreement. Thus, it has already come into force," Modi said.

Modi added that the developed world needed to do more to help poorer nations combat the effects of climate change.

Among those in attendance for Modi's address was former U.S. Vice President Al Gore, who told the Associated Press he loved what the Indian leader had to say.

"Prime Minister Modi made climate change the No. 1 priority. On that, I thought he did extremely well," Gore said.