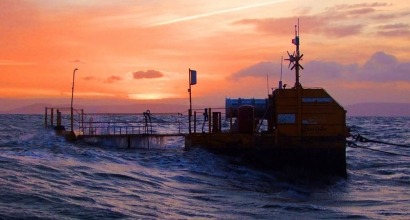 The OREDP is designed to facilitate the development of offshore renewable energy across three key pillars – environmental sustainability, technical feasibility and commercial viability by coordinating action across all of the relevant Government policy areas.

“Ireland has a landmass of around 90,000 square kilometres, but a sea area of around 10 times that size, at 900,000 square kilometres” said Mr Rabitte, speaking at the Ocean Energy Industry Forum in Dublin. “Ireland’s position at the Atlantic edge of the EU gives an almost unparalleled offshore energy resource, with suitable conditions available for the development of the full range of current offshore renewable energy technologies.”

The Minister added that the potential of the offshore renewable energy sector as a source of sustainable employment and growth in the green economy has been consistentlh identified in the Irish government’s economic planning and job creation strategies, as well as by the European Commission in its recent Communication on ‘Blue Energy’. This would be particularly beneficial to coast communities where job creation faces numerous challenges.

The OREDP is grounded in the principle that all development of offshore wind and ocean energy in Irish waters will adhere to Ireland’s EU and international environmental obligations and best practice. The Minister reflected this view in his speech, stressing the crucial importance of safeguarding the public interest in protecting the Irish marine environment but also re-stating the importance of the citizen being at the heart of the transition to renewable energy – both onshore and offshore – and the importance of timely and transparent engagement with the public for all offshore renewable energy development.

The document also identifies opportunities for Ireland to increase indigenous production of renewable electricity, thereby contributing to reductions in the country’s greenhouse gas emissions, improving the security of its energy supply and creating jobs in the green economy.

The implementation of the plan will be led by the Department for Communications, Energy and Natural Resources (DCENR). This in turn will also be the mechanism through which government action across the environmental, energy policy and economic development dimensions will be coordinated to support the offshore renewable energy sector to reach commercial viability. An Offshore Renewable Energy Steering Group (ORESG) will be established to oversee its implementation, chaired by DCENR with representation from numerous government departments along with the Marine Institute, the Environmental Protection Agency (EPA), the National Parks & Wildlife Service (NPWS), the Sustainable Energy Authority of Ireland (SEAI) and the wider offshore renewable energy industry. In this way the OREDP will also provide critical input for planning decisions in the marine environment and the development of marine spatial planning in Ireland.