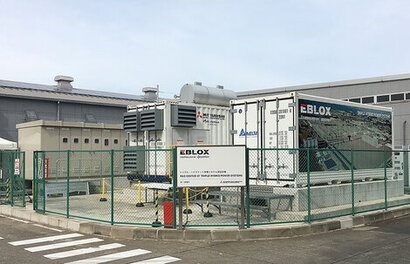 EBLOX optimises the use of renewable power sources by combining them with a reciprocating engine generator and a battery. This allows for a stable power supply that meets the local electrical demand. The demonstration plant was built in a factory operated by Calik Denim, a subsidiary of Calik Holding. The partnership aim to use the demonstration plant to collect data for further improvement and to display the EBLOX to potential customers, partners and government authorities involved in constructing microgrids across Africa and in countries neighbouring Turkey.

MHIET developed EBLOX as a solution to the unreliability of renewable energy in the face of various environmental changes and other factors, which can render it unsuitable for some microgrids or minigrids. The plant demonstrates how EBLOX can supply power to isolated microgrids, reduce fuel costs, and contribute to decarbonization using renewable energy. It consists of a 120 kilowatt solar power system, a 150 kW/167 kWh storage battery, two 34 kW gensets, a dummy load device of 300 kW, and the Coordy control system.

Many regions around the world located outside of the grid power network require simple and stand-alone microgrids. At the same time, stand-alone distributed power is increasingly being recognised as a power source in case of natural disasters such as earthquakes, storms, and floods. These factors, along with the worldwide trend toward decarbonisation, increase the importance of renewable energy in these areas.