Wednesday, 21 December 2016
0
Dan McCue
He may be in the waning days of his presidency, but on Tuesday President Barack Obama took steps to ensure his legacy as a climate-concerned, renewable energy promoting world leader by banning the issuance of future oil development leases in the majority of federally-owned waters in the Arctic Ocean and certain parts of the Atlantic Ocean. 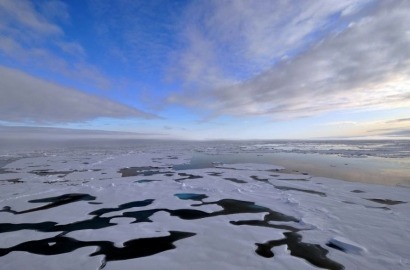 The White House decision, expected all day, but not formally unveiled until late Tuesday afternoon, is seen by many as a challenge to President-elect Donald Trump who has vowed to Unleash the national fossil fuel reserves while at the same time moderating his public stance about climate change and some renewables.

The White House timed its announcement in coordination with Canadian Prime Minister Justin Trudeau, who also placed a moratorium on new oil and gas leasing in its Arctic waters on Tuesday, subject to periodic review.

Obama based his order on a provision of 63-year-old federal law that says "the president of the United States may, from time to time, withdraw from disposition any of the unleased lands of the outer Continental Shelf."

When the law was adopted, former General Dwight D. Eisenhower was president. Seven presidents have occupied the White House since then, and Trump will become the eighth in a matter of weeks.

The White House said Tuesday that it is confident President Obama's directive by executive order will withstand legal challenge and said the language of the statute provides no authority for subsequent presidents to  "unwithdraw" waters from future lease sales.

In a memorandum, the administration cited environmental concerns to justify the ban. The president also issued a statement noting the minimal level of fuel production occurring in the Arctic.

The president said only 0.1 percent of offshore crude production came from the Arctic in 2015, and at current oil prices at near-historic lows, significant production would not occur in future decades.

"That's why looking forward, we must continue to focus on economic empowerment for Arctic communities beyond this one sector," President Obama said.

The Arctic withdrawal includes large swaths of the Chukchi and Beaufort Seas. It continues to allow leasing by oil and gas firms in a narrow portion of the Beaufort sea off the coast near the coastal communities of Deadhorse and Nuiqsut, Alaska.

The Atlantic waters placed off-limits to new oil and gas leasing are 31 canyons stretching off the coast of New England south to Virginia.

Of these areas, President Obama said, "the canyons are a defining characteristic of the Atlantic continental margin offshore the east coast of the United States.

"The canyons were formed when sea level was lower and rivers flowed to the margin of the continental shelf before the canyons were flooded by the sea when the ice melted after the last glacial maximum some 25,000 years ago," he continued. "The largest canyon is Hudson Canyon, which reaches depths in excess of 10,000 feet and is comparable in scale to the Grand Canyon, which is 6,093 feet at its deepest.

"The canyons are widely recognized as hotspots of biodiversity, biologically unique, and ecologically and economically valuable for fisheries," the president said. "Research demonstrates that the canyons provide valuable ecosystem services and economic benefits in addition to being places of refuge for species. Many of these species live many years, have low reproductive rates, grow slowly, and rely on the habitats provided by canyon features throughout their lifespans.

"In addition, and of great importance, the canyons are regions of enhanced biodiversity and play an important role in climate stability. The northwestern Atlantic is expected to be heavily impacted by climate change. The canyons provide important shelf and slope habitat heterogeneity that could offer refuge for species potentially impacted by climate change," Obama added.

Predictably, the oil and gas industry was displeased by the White House action.

Dan Naatz, of the Independent Petroleum Association of America, was one of many who blasted the move, opining on the organization's website that, "Instead of building on our nation's position as a global energy leader, today's unilateral mandate could put America back on a path of energy dependence for decades to come."

Also condemning the president was the National Ocean Industries Association, which said, “President Obama’s short-sighted, unilateral withdrawal of Atlantic and Arctic Ocean areas from future oil and gas leasing not only risks the long-term energy security and energy leadership position of the United States, it violates the letter and spirit of the law. ... We are hopeful that the incoming Trump administration can repair some of the damage done to the offshore energy industry and America’s energy security over the past eight years by putting policies in place that increase, rather than decrease, access to federal offshore areas.”

"The people of the Atlantic coast refused to allow their way of life to be compromised and we commend their hard work making their voices heard in Washington," Savitz said.

Joining Savitz in her praise of the president was Lindsey Allen, executive director of Rainforest Action Network, who said that while the White House move was a victory, it also signals that more needs to be done in the years ahead.

"This moment reminds us now, more than ever, that we need to double down our efforts to ensure that all our coasts and communities, especially the Gulf of Mexico which has long been sacrificed for this nation's energy needs, are protected from dirty energy," Allen said.