Wednesday, 10 April 2013
0
Dan McCue
President Barack Obama on Wednesday proposed a dramatic expansion of spending on renewables and other clean-energy initiatives while calling for the equally significant cuts to tax breaks and subsidies for oil, gas and coal. 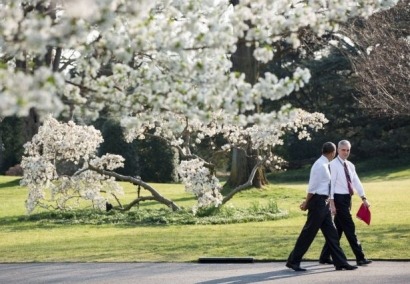 In sum, the president's 2014 budget proposal would eliminate $4 billion in subsidies for fossil fuels. At the same time, he's proposing increasing support for wind energy alone by almost 50 percent, while also ramping up support for everything from electric vehicles to energy efficiency.

Among other noteworthy line items is an allocation of $2.8 billion to the Office of Energy Efficiency and Renewable Energy to support research and development of new renewables technologies.

“As we continue to pursue clean energy technologies that will support future economic growth, we should not devote scarce resources to subsidizing the use of fossil fuels produced by some of the largest, most proﬁtable companies in the world,” the administration says in the text accompanying the spending proposal.

“That is why the Budget proposes to eliminate unnecessary fossil fuel subsidies that impede investment in clean energy sources and undermine efforts to address the threat of climate change,” it says.

The proposed budget increases spending on electric and hybrid vehicles by 75 percent above last year, and spending on bio-fuels and bio-refineries by 42 percent over 2012. It also increases funding for projects intended to make clean, renewable power, such as solar energy and off-shore wind, more easily integrated onto the electric grid by 29 percent.

At the same time, the administration says, the proposed budget, "more than doubles funding for energy efficiency and advanced manufacturing activities to help reduce energy use and costs in commercial and residential buildings, in the industrial and business sectors, and in Federal buildings and fleets.”

The budget allocates nearly $2 billion for an "Energy Security Trust" to transition cars and trucks off of oil, $615 million to increase the use and decrease the costs of clean power from solar, wind, geothermal, and water energy, and $575 million in cutting-edge vehicle technologies, and $282 million in next generation bio-fuels.

On top of all this, the U.S. Department of Energy is slated to receive an 8 percent increase in its discretionary budget from 2012, this year reaching $28.4 billion.

The budget also establishes up a $200 million competition to encourage state governments to boost energy efficiency, modeled on the administration's Race to the Top education program.

Analysts in the U.S. point out that the President's proposals are unlikely to become law in their present form due to staunch resistance to both fossil fuel-related cuts and clean energy supports by the Republicans who currently control the U.S. House of Representatives.

However, they also say the proposed budget suggests renewable energy will continue to be a priority for the president throughout his second term.

Since 2008, the United States has nearly doubled its energy generation from wind, solar, geothermal and other renewable energy sources.