Tuesday, 13 September 2011
0
Dan McCue
President Barack Obama received scores of accolades for his mention of bio-fuels in his speech to the US Congress last Thursday announcing his $447 billion jobs creation plan. However, advocates for alternative fuels would be hard-pressed to find any dedicated follow-through in the actual bill sent from the White House to the Capital the following morning. 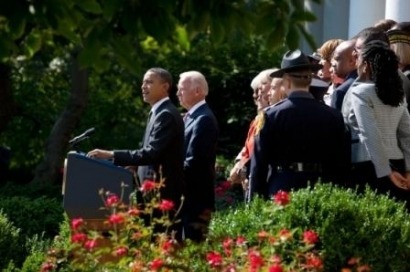 In fact, neither “bio-fuels”, “ethanol” nor any other viable substitute is mentioned a single time in the text of the American Jobs Act sent to the US Congress for its approval. However, renewable energy, energy efficiency and sustainable, green building are all part of the plan, showing that the White House does indeed intend to foster hiring in the clean-energy and green-building sectors.

The passage from President Obama’s speech that so excited the bio-fuels community in the US was but a half paragraph in his 54-paragraph presentation.

“If we provide the right incentives and support — and if we make sure our trading partners play by the rules — we can be the ones to build everything from fuel-efficient cars to advanced bio-fuels to semiconductors that are sold all over the world,” Obama said. “That's how America can be number one again. That's how America will be number one again.”

In the wake of the speech, the National Bio-diesel Board (NBB), the trade association for the US bio-diesel industry, released a statement saying it was :thrilled to hear President Obama reaffirm his support for Advanced bio-fuels.”

"Even in this economy, our industry is experiencing a boom,” Steckel said. “We’re on pace to produce more bio-diesel than ever before. We strongly encourage Congress to follow through with a green jobs package that includes the bio-diesel tax incentive that gets people back to work.”

In a blog post Tom Buis, CEO of Growth Energy, a group that represents the producers and supporters of ethanol, hailed the Administration’s “continued dedication to renewable fuel and investments in American infrastructure demonstrates that President Obama recognizes the role that a robust bio-fuels industry can play in making America's economy the world's strongest once again.”

The comments were a marked change in mood from only a week earlier, when Renewable Fuels Association President and CEO Bob Dinneen expressed frustration at a "dysfunctional" Congress that has failed to move forward on energy legislation.

"They're focused right now on this super committee, which is a recipe for more gridlock," Dinneen said. “The ethanol industry is bracing itself for the elimination of its tax incentives.”

While the actual American Jobs Act does not contain any bio-fuel provisions, the document is rich with promising signs for the renewable energy industry.

Project Rebuild, for instance, authorizes a $15 billion appropriation that state and local governments, qualified non-profit organizations, and businesses can use to rehabilitate and refurbish hundreds of thousands of vacant and foreclosed homes and businesses across the country.

The project is intended to stabilize neighbourhoods hardest hit by the national foreclosure crisis.

Among the criteria the Administration is specifically encouraging be used for these projects are those promulgated by the US Dept. of Energy through its Energy star program; CHPS Criteria, a green building rating program developed by the Collaborative for High Performance Schools, the LEED Green building rating system promoted by the US Green Building Council; and Green Globes, an environmental design and rating system.

A subsection requires the entities bring the properties up to applicable codes and “permits use of renewable energy sources” when upgrading energy generation and heating system.

Also promoted in the bill are energy audits, modernization, renovation, or repair activities related to energy efficiency and renewable energy, and improvements to building infrastructures to accommodate bicycle and pedestrian access.

On a related note, the bill also calls for modernizing at least 35,000 Public Schools, stating that "Permissible uses of funds would include a range of emergency repair and renovation projects, greening and energy efficiency upgrades, asbestos abatement and removal, and modernization efforts to build new science and computer labs and to upgrade technology in our schools."

Significantly, it doesn’t specifically call for the creation of a charging infrastructure for electric vehicles.

But it does include $10 billion for “innovative ways of financing and investing in infrastructure,” noting that some needed infrastructure projects “may be difficult to fund under the current patchwork of Federal programs.”

Among those heaping praise on the president even after the text of the Act became known was the US Green Building Council .

“It is clear that we must rebuild and modernize our increasingly brittle built environment,” said Rick Fedrizzi, President, CEO and Founding Chair, USGBC. “The country’s infrastructure – our buildings, our roads, our transit, and our bridges – are in desperate need of investment, and the thousands of building sector professionals and small businesses, hard hit by the struggling economy, can be put back to work overnight. We just need to get on with it, and we offer our full support to President Obama’s proposal and to the passage of the American Jobs Act.”