Obama Tells Mayors They Can “Inspire the World”

Wednesday, 06 December 2017
0
Dan McCue
“As we speak, Miami already floods on sunny days.” With these words, former President Barack Obama began his speech yesterday at the North American Climate Summit attended by municipal leaders from across the world. He spoke for just under 15 minutes, in measured tones, about the threat posed by climate change. 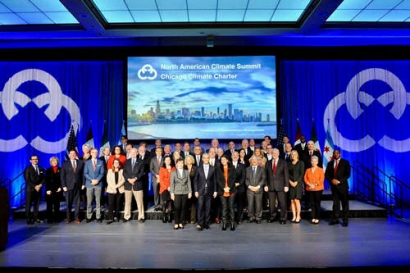 “Climate is changing faster than our efforts to address it. That’s why I made climate change a priority when I was president. Now we are in an usual time when the US is the only nation on earth that doesn’t belong to the Paris Agreement, and that’s a difficult position to defend,” he said.

Pointing out that, “cities, states, businesses, universities, and non-profits have emerged as the new face of American leadership on climate change” he went on to say “that sends a powerful message to the world.”

Referring to climate change as a “generational issue” he said, “The thing you want to make sure of is your kids, and their kids are going to be okay. And the one thing that might make it not okay for them is this.

“I’m hoping as a consequence of seeing meaningful impacts in your own cities, it inspires you to bolder and bolder work. That in turn can inspire the country and that will inspire the world.”

The summit is being held to provide cities with the opportunity to articulate commitments to the Paris Agreement and highlight the scope and scale of city climate action in the United States following the Trump administration’s decision to withdraw from the Paris Agreement.

"Rather than burying our heads in the sand, Chicago is working with cities across the country and around the world to address the threat of climate change," said Mayor Emanuel. "Even as Washington fails to act, cities have the power and will to take decisive action to protect our planet and the health and safety of our residents."

By signing the Chicago Climate Charter, cities are pledging to:

“The North American Climate Summit sends a timely message to leaders around the world that cities are taking strong, swift and measurable action to reduce their greenhouse gas emissions, ensure their communities are more resilient and transition their local economies to benefit from a low-carbon world,” said Global Covenant of Mayors Vice-Chair Christiana Figueres.

The North American Climate Summit was hosted by Mayor Emanuel, in concert with the Global Covenant of Mayors for Climate & Energy. The Summit is supported by the Joyce Foundation, the MacArthur Foundation and the Crown Family Philanthropies.