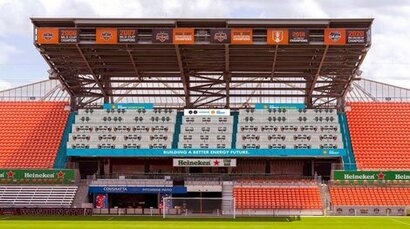 As part of this relationship, and to support the Club in achieving its goal of reducing its carbon footprint by an estimated 50 percent by 2026, Shell Energy says it will be implementing integrated energy solutions such as LED lighting installation, HVAC system replacements and EV charging stations at PNC Stadium. These efforts will extend to the community as well, through programmes such as “Trees for Threes”, in which the Club and Shell Energy will plant a tree for every game that the Dynamo or Dash win which gives the team three points in the league standings.

“Shell Energy is at the forefront of providing cleaner and more sustainable energy solutions, and we are thrilled to welcome them into the Houston Dynamo Football Club family” said Houston Dynamo FC President John Walker. “We take pride in being leaders on and off the pitch, and with the help of Shell Energy we aim to be a leader in sustainability by reducing our carbon footprint by half over the next five years.”

The first match under this new relationship will take place on February 27, 2022 at 6 p.m. CT against Real Salt Lake. The Houston Dash opens the Challenge Cup at home at 6 p.m. CT on Sunday March 20.