Thursday, 05 May 2016
3
Robin Whitlock
Prior to his death on 14th April, the celebrated British energy expert Professor Sir David Mackay commented that renewable energy technologies like solar and wind could not meet UK energy needs 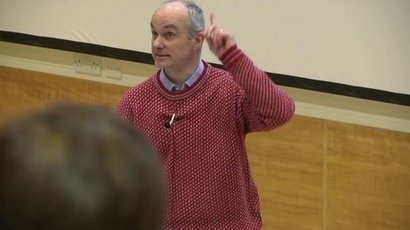 Sadly, Professor Mackay, author of the book Sustainable Energy – Without The Hot Air (2009), died at the age of 48 after losing a battle with stomach cancer. His book was much acclaimed, with favourable reviews in Science, The Guardian, and many other publications and blogs. Nine months after the book was published, Mackay was appointed as Chief Scientific Advisor at the Department of Energy and Climate Change (DECC).

Shortly before his death, Mackay was interviewed by author, journalist and environmentalist Mark Lynas in which he commented that further deployment of wind and solar was not an effective energy strategy for the UK given the intermittency issues and land requirements involved.

“There's this appalling delusion that people have that we can take this thing that we are currently using to deliver 1 percent of all our energy and we could just scale it up” Sir David said during the interview, concerning the potential contribution of individual renewable energy sources. “I think it’s so dangerous for humanity that people allow themselves to have these delusions that they're willing to not think carefully about the realities and the laws of physics. It's always country specific so for the UK I think we want a zero carbon solution and it has to work in the winter.”

Professor Mackay further claimed that solar is not a good match for UK energy demand, especially in winter. He said that nuclear and carbon capture and storage (CCS) is the best way forward for low carbon energy in the country and also questioned the value of battery energy storage deployed in support of solar.

Whilst recognising the sensitivity of the occasion, members of the renewable energy industry have now responded to Mackay’s remarks on the matter.

“Professor David MacKay was passionate about energy and climate change and he inspired many people, but he was never a fan of solar power so I’m not surprised by his last comments” said Leonie Greene, Head of External Affairs at the Solar Trade Association (STA). “I don’t feel comfortable taking issue with someone who is no longer here, but the fact is since his book was first published, solar power has boomed and last year more was invested in solar power than coal and gas combined. There is striking consensus now in the energy industry about the shape of a clean energy system and it is smart, highly distributed, much more active on demand-management and centred around consumers who may also be producers. The technological challenges Professor MacKay defined are readily surmountable and the plummeting costs of renewables are our best hope of averting dangerous climate change.”

The STA’s response is supported by recently published data from EnAppSys indicates that solar supplied over 7 percent of UK energy during the first quarter of 2016. This finding is supported by DECC figures for 2015, showing that solar PV achieved 9.1 percent of renewable energy generation. The figures also show that UK renewable energy supplied just under a quarter, 24.7 percent, of UK electricity demand in 2015.

“Any future energy mix has to be technology neutral, fact based and addressing the needs of the energy trilemma” said James Court, Head of Policy & External Affairs at the Renewable Energy Association (REA). “The steep cost reduction of solar has caught many by surprise, as has the technological and cost advances in storage. These sectors are real and deploying now, both at grid and domestic level and offer a transformative route to a low cost, low carbon and energy secure Britain. We are already seeing government make ideological decisions against their public statements of pursuing the lowest cost options. Unlike solar, nuclear prices are rising and is looking increasingly unlikely whilst CCS is still stuck in R&D, unlike energy storage technologies which are already commercially viable.”

For these reasons, there is still considerable opposition to nuclear with the industry while at the same time, movement away from centralised deployment of energy has increased, in favour of distributed energy and local generation. If anything, the support for this has increased with the rapid growth of clean energy deployment in the country, particularly solar. Furthermore, last year, speaking to World Energy Focus, the former National Grid chief executive Steve Holliday commented that the idea of baseload power is now outdated.

Furthermore, battery storage is likely to be cheap enough for ordinary households to retrofit it onto existing energy systems within two years, according to a report by the REA released in January. REA chief executive Nina Skorupska meanwhile predicted that 2016 will be a ‘breakthrough year’ for energy storage and demand systems.

Tags: Solar ,Renewable energy ,Storage ,Climate change ,Nuclear ,Wind ,Grid ,Electricity ,PV ,Carbón
Add a comment
yok
eye shadows can really make a great looking face specially if it was done by a professional make up artist,, 英文補習 =-=- Do you mind if I quote a few of your posts as long as I provide credit and sources back to your webpage? My website is in the very same niche as yours and my visitors would really benefit from some of the information you present here. Please let me know if this alright with you. Appreciate it! 初小英文
motm
I gotta favorite this website it seems invaluable extremely helpful GLOCK 30 FOR SALE -------------This article is dedicated to all those who know what is billiard table; to all those who do not know what is pool table; to all those who want to know what is billiards; glo carts for sale
motm
I saw a lot of website but I think this one contains something special in it in it http://173.254.36.160/login/
¡Suscríbete!
wind