US debt ceiling crisis could lead to repeal of renewables subsidies

Thursday, 28 July 2011
1
Dan McCue
With the Obama administration and the US Congress locked in a game of brinkmanship over raising the nation’s $14.3 trillion debt ceiling, consensus is growing that a repeal of subsidies for renewables and other energy sectors will be among the deep budget cuts that will end the impasse. 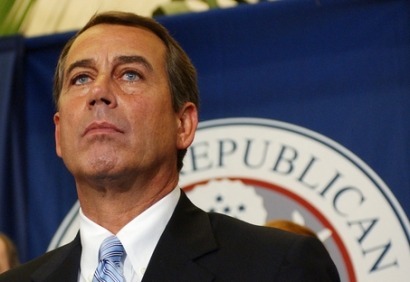 Later today in the US, the Republican-controlled Congress is expected to hold a series of votes on a package it says will avert a historic default on America’s financial obligations.

But the proposal, which is being championed by Republican Speaker John Boehner (shown above) faces stiff resistance from the restive “tea party” caucus in his party.

Although some long-time lawmakers, like South Carolina Senator Jim DeMint, have tied their reputations to the “tea partiers,’ the group is comprised mainly of freshmen lawmakers who were elected last year based largely on promises they would deeply cut the federal budget and reduce the overall size of the government.

Even if Boehner can round up enough votes for his plan to pass the House (something looking increasingly likely as discussion in the House continued on Thursday), it is very likely to die in the Democratic-controlled Senate, where Majority Leader Harry Reid has his own proposal. President Obama is also said to be “strongly against” Boehner’s plan and he has already threatened to veto it.

Crunch day is Tuesday, 2 August 2011. If no deal is struck by then, the federal government faces the prospect of running out of cash and being unable to pay its bills.

The non-partisan Congressional Budget Office said this week that the Senate Democrats' plan to raise the debt ceiling would save the nation $2.2 trillion over the next ten years; while Boehner’s plan, which is broken into two steps, would initially save about $850 billion over the next decade.

The second phase of Boehner’s plan would seek additional spending cuts, the impact of which obviously could not be included in the Congressional Budget Office’s analysis. Somewhat chastened by the finding, Boehner is said to have added more cuts to the first phase of his proposal in anticipation of today’s House votes.

At this point, it is not at all clear to those in the renewable energy industry – or the general public as a whole – what’s being cut and how deeply the pain will be felt.

A poll released in the past week by the National Journal found that 70 percent of its “energy and environment insiders” believe ethanol subsidies will be substantially cut as any debt-ceiling deal.

Those in that majority cited two reasons: A symbolic, 73-27 vote in the US Senate in June to repeal those subsidies, and a deal announced in recent days by a trio of senators that puts most of the remaining ethanol subsidy to the deficit and keeps a sliver of it for bio-fuels and other renewable energy industries.

Even if they survive in the current, embittered climate in Washington, DC, a sigh of relief may not be appropriate: As it stands now, almost all of the US government’s energy subsidies are set to expire in the next year anyway unless Congress renews them.

With an annual price tag approaching $6 billion, subsidies for ethanol – the most subsidized part of the renewable energy mix -- are not expected to survive in the long-term in their present form.

According to the US Dept. of Treasury, over 7000 projects funded to the tune of $6.4 billion, resulting in total investment of $21.6 billion.

Although the credits do not expire until October 2012, some believe they will also be allowed to sunset as part of the eventual debt-ceiling deal.

In the meantime, a new grassroots organization, the Association to Reduce the National Debt, is promising to collect donations to pay down the national debt.

In a written statement, organization founder Seth Eisenberg said that after a review of relevant federal law, he concluded that he could set up an organization that would make contributions to reduce the federal debt, and that the government would be required to use those contributions for just that purpose.

“Today, America is spending over $413 billion per year on interest payments for its debt alone,” the statement said.

By reducing the national debt, America will be able to save the money wasted on interest and invest in, among other things, the development of renewable energy, improving roads and bridges, and improving education, the statement said.

In the meantime,the way forward in the debt-ceiling crisis in the US is far from clear, but there are those that believe a deal still could be made.

One reason is that the Reid plan in the Senate includes about $1 trillion in spending cuts tied to the draw-downs of the wars in Iraq and Afghanistan.

In its analysis, the Congressional Budget Office concluded that these are, in fact, legitimate cuts, but critics of the plan have noted that the draw-downs are actually occurring already and therefore do not really represent “new” action on the federal budget.

However, there is a silver lining to that criticism: If one doesn’t count those draw-downs, the Boehner and Reid plans are similar enough to create room for compromise.

US House of Representatives

Association to Reduce the National Debt

Tags: Renewable energy ,Fuel ,Solar ,Waste ,Wind
Add a comment
Drywall
Awesome post! Thanks for sharing its very good article keep it up. Would you to visit our website? Drywall Jacksonville Thank you
¡Suscríbete!
wind