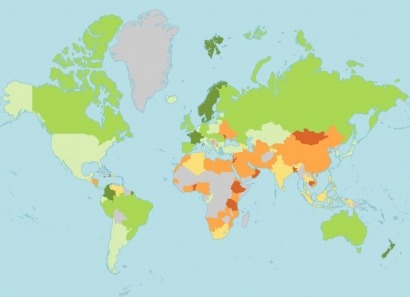 Prepared in collaboration with Accenture, the Index assesses regions and 124 countries according to economic growth, environmental sustainability and energy security performance, analysing the complex trade-offs and dependencies that affect country efforts.

Norway tops the Index rankings, followed by New Zealand and France. The top ten is dominated by EU and OECD countries with the exception of Costa Rica and Colombia. 41 percent of energy supply in the top ten countries comes from  low carbon energy sources, compared to a global average of 28 percent.

“For an effective energy system countries need to focus on all three sides of the energy triangle - environmental sustainability, security of supply and affordability,” he said.

European Union and Nordic countries top the rankings, underscoring the ability of service sector economies to prioritize investment in the development of low-carbon economies and address climate change through renewables and energy efficiency.

The drive for sustainability has meant some trade-offs in energy affordability, the World Economic Forum says –  underpinning the policy debate in Europe as utilities and consumers struggle with pricing and an uncertain policy landscape.

Among the report's findings:

The Report finds that many developing countries still struggle to supply citizens with basic energy needs, providing electricity to less than 50 percent of their total population. It also highlights the over-dependence of many energy systems, with 32 percent  of countries dependent on imports to meet more than half of their energy needs. However, energy trade can have positive impacts for both importing and exporting countries but can pose economic and energy security risks, in particular when coupled with dependence on few trading partners.

“Our analysis concludes that there is no single way forward; each country must work with its own resources and constraints, making difficult choices and trade-offs,” said Arthur Hanna, Managing Director, Energy Industry, Accenture, and a Member of the World Economic Forum’s Global Agenda Council on New Energy Architecture.

“The Index helps nations take stock of their energy transition challenges and address key barriers to success, such as market distorting subsidies, continued uncertainty around energy policy and funding for research and development of new energy sources and technologies,” he said.