Friday, 29 May 2020
2
Robin Whitlock
YouTube took down Planet of the Humans on Monday (25th May) and the reason for this move seems to have been a copyright infringement by the film, judging by a complaint to this effect lodged by British photographer Toby Smith. 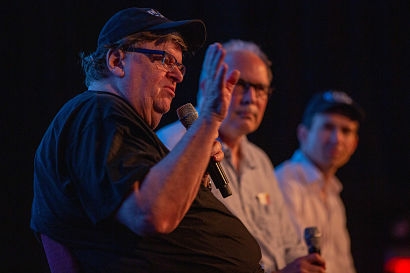 The complaint against Michael Moore and Jeff Gibbs alleges that a few seconds of Mr Smith’s 2015 film Rare Earthenware were used without his permission. The clip used by Planet of the Humans shows the Shiguai coal mine in Mongolia, China, as part of a comment concerning the manufacture of wind turbines and solar panels.

Although the sources of footage used in Planet of the Humans are credited at the end of the movie, Mr Smith says that the use of scenes from Rare Earthenware doesn’t constitute fair use because they were used in a particular manner to support the narrative in Planet of the Humans that Smith argues, along with many others across the clean energy industry and environmental sector, including REM, hasn’t been properly researched and is therefore riddled with errors and in effect misrepresents the industry.

However, copyright law grants fair use if the use of footage is ‘transformative’, meaning that any repurposing of original material changes its nature such that copyright is no longer infringed. On this basis, Rebecca Bellan, writing in Forbes, argues that Moore and Gibbs would be protected by fair use if the footage was used for “commentary, criticism, education or news, according to copyright law”.

Despite this, YouTube, according to its standard practice in response to copyright claims, has removed Planet of the Humans in its entirety anyway. Thus the issue will now have to be discussed in court if Gibbs and Moore want to take the matter further.

“It is a misuse of copyright law to shut down a film that has opened a serious conversation about how parts of the environmental movement have gotten into bed with Wall Street and so-called ‘green capitalists’” Gibbs said in a statement to The Verge, denying copyright violation. “This is just another attempt by the film’s opponents to subvert the right to free speech.”

Planet of the Humans is still available for viewing on Gibbs Vimeo account. Yet, Smith, an experienced environmental journalist and film maker, is defiant in his opposition to his work being used for a narrative he does not agree with.

“I went directly to YouTube rather than approaching the filmmakers because I wasn’t interested in negotiation” Smith told The Guardian. “I don’t support the documentary, I don’t agree with its message and I don’t like the misleading use of facts in its narrative.”

Liam Young, who collaborated with Smith on Rare Earthenware, told The Verge that in his opinion, “the longer it stays offline, the better for the amazing work that the environmental movement has been doing in the last 10 years”.

Among the substantial criticism launched against Planet of the Humans is the criticism that the errors contained throughout the film gives a substantial advantage to climate change deniers and critics of the global clean energy industry. Perhaps unsurprisingly, this complaint seems to have been validated by the multitude of claims on social media, particularly Twitter, that the removal of the film by YouTube was the work of “leftist censors” determined to hide “the truth” about climate change and clean energy.

Gibbs and Moore may decide to take the matter to the courts.

REM commentary Wednesday 13th May - Just Plain Wrong: The false claims, errors and outdated information that is Planet of the Humans

Tags: Climate change , China , Solar , Wind , Wind turbine
Add a comment
pwg
Well, personally, I was \"taken in\" at first by Moore and the film, though I should\'ve been much more critical of it in the beginning, or the simple facts that it used way outdated data about renewables solar and wind, or used a spokesperson for the internal combustion engine anti electric vehicle in the form of Ozzie Zehner. I don\'t know what Moore is doing now, and I\'ve respected him in the past, but this recent work or the fact that I now have to fact check everything he does, doesn\'t sit well with me anymore, nor do I think he is a real researcher anymore either---it\'s more with polemics or something. Or, that he tried to fool me and other folks on the side of climate science, esp. when we have such an uphill battle now in this country. For shame, Mr. Moore and Mr. Gibbs, glad they took your film and its bad citations that you annotate on every minute off of youtube, to make us think that\'s worthy or something! You guyz have partially ruined your own reps here.
Robert Stumm
I interpret \"Planet of the Humans\" issue with renewable energy not so much with the technologies themselves, but rather with touted economies of scale. environmental organizations are selling renewable energy as a one for one substitute for carbon fuels. They are not, and should not be. If renewable energy technologies are deployed on the same scale that carbon fuels have been deployed environmental problems of similar magnitude will occur. I believe what Gibbs, Moore, and Ozzie are arguing for is for reductions in energy consumption overall, and that would actually be good for the renewable energy industry. Renewable energy becomes more competitive where total and specific energy demands are less. The \"edge\" that carbon fuels have in terms of high specific energy density is mitigated when consumption demands are reduced. Rather than being antogonists, renewable energy and less total energy consumption should work as complements.
electric/hybrid