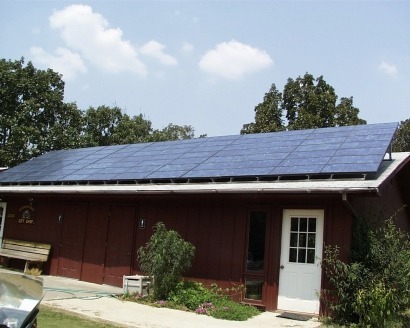 Danish farmers are increasingly interested in investing in renewable energy, particularly solar, simply because it is very good business to do so. At least that is the implication given by the attendance at special solar-themed information meetings held all over the country over the last few months.

In 2012 the Danish government implemented new rules under which farmers can sell electricity to the national grid at a guaranteed price of 1.30 kroners (0.17 eurocents) per kWh over ten years for systems up to 400KW. This means that they can earn money for electricity supplied to the grid while also making savings on their own energy consumption. One of the factors making such investment attractive is the continuing fall in the price of solar energy equipment, especially solar PV systems. Another is the increasing life expectancy and increased efficiency of systems. Indeed the solar energy sector in Denmark has also been reporting increasing interest from owners of camping grounds, neighbourhood communities and entire villages, housing associations and commercial enterprises.

“We expect to install many solar PV systems this year,” said Bjarne Rasmussen who is a founder of one of Drivhuseffekten, one of the largest PV system supply companies in Denmark. “At the moment we are working on large projects of in total 2 MW in two municipalities, Roskilde and Egedal, with rooftop installations on schools, day-care centres and office buildings. Housing associations could install PV arrays on carports and parking facilities.”

Drivhuseffekten specialises in the construction of large systems for commercial enterprises and municipal bodies. The company is also behind Scandinavia’s largest rooftop solar power installation on the top of an office building occupied by Topdanmark, the country’s second largest insurance company, in Ballerup near Copenhagen. Rasmussen is keen to emphasise that PV systems in urban areas do not necessarily have to be installed on rooftops. He will be illustrating the various possibilities for commercial enterprises under the new rules at ‘The Solar Future: Denmark’ conference in Copenhagen on March 21st. The conference will also feature solar analyst Pietro Radoia from Bloomberg New Energy Finance who will be discussing how international solar industry developments will impact the Danish market. One of the problems with the new rules however is that PV systems have to be installed before the end of December 2013 in order to qualify and that could be challenging for municipal systems that can take up to six months for case-processing of building permits for ground-mounted systems.